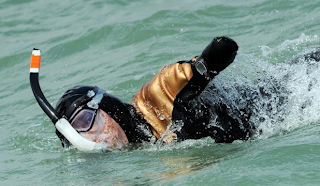 Explain how the the headline and picture are effective and how they link to the text.
The list of numbers in the headline ‘four’, ’13’ increase in magnitude showing exactly how ‘extraordinary’ the swim is, particularly in conjunction with
the clear fact that this man has had ‘all of his limbs’ amputated as is emphasised in the subheading - as we only have four limbs. This links to the amount of numbers in the article, where it says that the swim was '21 miles’ long, and he expected to spend '24’ hours is used to show the extent of this man’s incredible determination.


You can see this from the expression on his face in the photo, and the use of the hyphen (dash) in the title is used like a balance to weigh up the sheer size of the obstacles with the magnitude of his achievement. The word ‘extraordinary’ links to the fact he is the ‘first limbless person to swim the channel’. It’s also even more amazing because he expected to do it in '24’ hours but actually it took '13’, and he worked himself up to do this a whole '16’ years after he lost his limbs. To ‘cross channel’ swim is hard at the best of times, which is shown in the article where it says even an ‘average’ swimmer takes ‘eight’ hours. The use of statistics in the headline, subheading and article give clear comparison and sense of scale of this great achievement.


The picture shows Croizon’s amputated arm clearly with the gold flash suggesting that he is a hero, where ironically the text says he used to be a ‘sofa sportsman’, and even with his arm gone, he is achieving more. The watch shows he’s racing against the clock, but also emphasises that his arm is gone as we’d normally wear a watch on the wrist - the absence of the arm in the midst of this choppy, menacing dull coloured sea is unsettling. This links to the word ‘treacherous’ which shows the danger of the sea.

Want me to write you an essay? Ask in the comment box below.