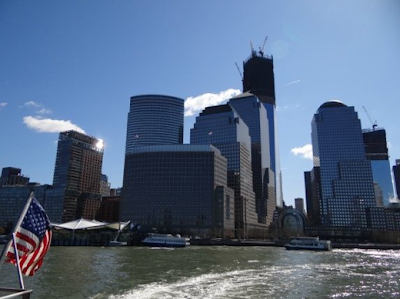 Place: New York. Where to start? On the plane, if you want to describe the journey, or the moment you find out you're going if you'd like to build suspense. Otherwise, start with your feet on the hot pavement and put the reader there beside you.

The first question my student had was: how can I avoid writing 'I' all the time? It's tricky. Find out how travel writers do it here.

How to use sensory language and lists:
I walked into the lemon smell of elevator-freshener, armpit and cheap perfume: thick, sweet, dirty. I didn’t like the way she looked at me. Hair like a bonfire, and I don’t just mean the colour. It was like angry birds were fighting in it.

Choose more Interesting Verbs
We erupted from the overcrowded subway train in a foam of sweating humanity.

Student's Version:
Instead of normally being allowed to get out of the train first, we were met by hasty businessmen and loud mouth college students. It was a typical Manhattan rush hour.

Finally, I sighed in relief. I could breathe normally. My Aunt took the lead as always with my mother following hastily behind her, both holding on to at least one of my sisters’ hand like two tow trucks. I did my best to keep up since I was still struggling to breath correctly due to the after effects of the Train Situation. Up the grubby stairs we went, past the overcrowded Newsstand, past the jazzy beggar on the saxophone blowing as hard as he could for a few dull coins. Cheekily, I tossed a dollar into his sax case.

A hard slash of light opened above. Then it hit me.

'the petrol hum of the city.'
'The acrid tang of petrol'
'The dirty-sweet smell of petrol settled like dry dust in the streets.'

Student Version
A whiff of the famous New York Pretzel entered my nostrils. I could almost taste them on my tongue, however there was no time to waste. The best was yet to come.
Right in front of me was a Giant Skyscraper, towering over me like... I couldn’t describe it. There weren't a few, breaking the skyline nervously - there were hundreds. Even the subway station was Big.

To the left, a three-floored McDonalds’ Restaurant dangled long banners over the heads over the hordes of New York. Beside it was a massive “Emperor” cinema with traditional American ticket booths like Punch and Judy shows where the only show was the ticket seller yelling, his mouth blubbering up and down like a full-grown walrus. In downtown New York, we strolled past endless clusters of shops covered in tinsel and Christmas lights. Famous yellow New York Taxis zoomed past like outsized toys.

Further down, the Sun shone on Manhattan Harbour, almost crystallizing.

For info: the student version looks to me like a top B. If he was lucky, he might scrape an A.

Teachers, please feel free to use this resource with your class, with the attribution:(c) 2013 Melanie Kendry, ateacherwrites.com  Otherwise, please link, don't copy.
Go to all Creative Writing Resources