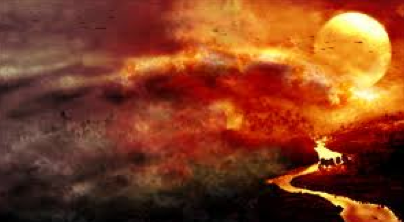 Heart of Darkness, Joseph Conrad
Context: The main character, Marlow, is travelling into a remote part of the Congo to recover an employee of his company, Kurtz, who has ‘gone native’. Heart of Darkness exposes the dark side of European colonization (of Africa)while exploring the three levels of darkness that the protagonist (hero), Marlow, encounters: the darkness of the Congo wilderness, the darkness of the Europeans' cruel treatment of the African natives, and the darkness within every human being for doing evil.
This extract is from Chapter Two, where Marlow is travelling upriver in a steamboat.
"Going up that river was like traveling back to the earliest beginnings of the world, when vegetation rioted on the earth and the big trees were kings. An empty stream, a great silence, an impenetrable* forest. The air was warm, thick, heavy, sluggish. There was no joy in the brilliance of sunshine. The long stretches of the waterway ran on, deserted, into the gloom of overshadowed distances. On silvery sandbanks hippos and alligators sunned themselves side by side. The broadening waters flowed through a mob of wooded islands; you lost your way on that river as you would in a desert, and butted all day long against shoals, trying to find the channel, till you thought yourself bewitched and cut off for ever from everything you had known once--somewhere--far away--in another existence perhaps. There were moments when one's past came back to one, as it will sometimes when you have not a moment to spare to yourself; but it came in the shape of an unrestful and noisy dream, remembered with wonder amongst the overwhelming realities of this strange world of plants, and water, and silence. And this stillness of life did not in the least resemble a peace. It was the stillness of an implacable* force brooding over an inscrutable* intention. It looked at you with a vengeful* aspect. I got used to it afterwards; I did not see it any more; I had no time. I had to keep guessing at the channel; I had to discern, mostly by inspiration, the signs of hidden banks; I watched for sunken stones; I was learning to clap my teeth smartly before my heart flew out, when I shaved by a fluke some infernal sly old snag that would have ripped the life out of the tin-pot steamboat and drowned all the pilgrims; I had to keep a look-out for the signs of dead wood we could cut up in the night for next day's steaming. When you have to attend to things of that sort, to the mere incidents* of the surface, the reality--the reality, I tell you--fades. The inner truth is hidden--luckily, luckily.
… deeper and deeper into the heart of darkness. It was very quiet there. At night sometimes the roll of drums behind the curtain of trees would run up the river and remain sustained faintly, as if hovering in the air high over our heads, till the first break of day. Whether it meant war, peace, or prayer we could not tell. The dawns were heralded by the descent of a chill stillness; the woodcutters slept, their fires burned low; the snapping of a twig would make you start. We were wanderers on a prehistoric earth, on an earth that wore the aspect of an unknown planet. We could have fancied ourselves the first of men taking possession of an accursed inheritance, to be subdued at the cost of profound anguish and of excessive toil. But suddenly, as we struggled round a bend, there would be a glimpse of rush walls, of peaked grass-roofs, a burst of yells, a whirl of black limbs, a mass of hands clapping, of feet stamping, of bodies swaying, of eyes rolling, under the droop of heavy and motionless foliage. The steamer toiled along slowly on the edge of a black and incomprehensible frenzy. The prehistoric man was cursing us, praying to us, welcoming us--who could tell?

Highlight/annotate the text to help you answer the questions.