How to Write About the Structure of Regular and Irregular Poems 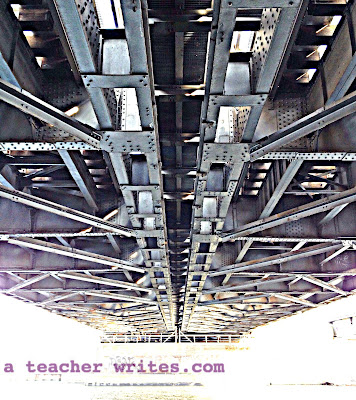 If it's built like a hymn, or a nursery rhyme, with refrains and repetition, think about why the poet has used this.

Balance can be used to echo a balanced, orderly life, or to tightly control an unbalanced one, like the mind of a murderer, where mad logic rules. Technical terms are in bold.


The structure of the poem is regular, with verses of four lines each and similar length lines. This creates a feeling of tight control that adds to the theme of power and perfect balance in the hawk. The punctuation is equally tight, with many sentences contained within the line, which gives an abrupt, sharp, controlled feel. However, there is some enjambement which breaks free of the stanza to run across the line break, as if the hawk can disregard the rules, creating a flowing effect as he lists his powers.

My Father Thought It Bloody Queer, Simon Armitage [read the rest of this essay]

The first stanza has a regular rhyme scheme with aabbb; however in the second stanza, the rhyme scheme starts to break down and seems irregular. This echoes the breakdown in authority or control as the poet rebels. In the final stanza, a kind of balance or compromise is reached, the first and last lines rhyme together (12,15), but the middle two are unrhymed or free (13,14).

The words ‘slept’ and ‘wept’ are rhymed, with ‘wept’ in a prominent position at the end of the stanza, which is also emphasised by the alliteration with wounds.

Birthday, Christina Rossetti [read the rest of this essay]

The poem is structured like a hymn about love. The two stanzas are in perfect balance using the chorus-like refrain 'my heart is' and 'my love is come to me.' The first stanza lists a series of similes where Rosetti compares her feelings - 'my heart' to a series of images of the beauty of the natural world, increasing in rarity and beauty as the first stanza progresses.

Poem, Simon Armitage [read the rest of this essay]

The title ‘Poem’ is blank; it’s impossible to interpret. This links to the theme of failing to pass a proper judgement on the man. The very regular, tightly controlled structure of the poem suggests balance. The regular structure - with three stanzas of equal length and equal length lines creates a tightly controlled feel. The repetition of ‘And’ at the start of most lines adds to this, as does the fact that most lines are only one sentence long. Each line feels abrupt. It also creates the sense of a huge list (of evidence) as Armitage details the actions and life of the man which is held up for judgement.

Irregular:
Old Age Gets Up, Ted Hughes [read the rest of this essay... coming soon]

Hughes uses a noticeably irregular structure: many lines are long, but others are only one word long, pushing into a position of emphasis words like ‘ponders’, which is ironic as it’s not naturally an important or meaningful idea - it’s just thinking. In fact, a lot of the poem is about this kind of vague, blurry insubstantiality. There are no full stops: this is thought without end and is full of fragments, which creates a sense of jagged, unstructured thought which rarely condenses into meaning. Interestingly, though this is about old age, most of it is in the present tense. We’d expect the past tense. Hughes challenges our expectation, putting us straight into a moment few would want to inhabit, but which most of us, at some point, will. The present tense zooms in on sense impressions and feels blurry and hard to follow, recreating the experience of old age.

To Compare a Regular and an Irregular Poem:

Rejection makes use of its irregular structure to create a short, sharp tone. The poet uses a short, simple clause to start 'Rejection is orange’, and the irregular structure and short line length gives an abrupt, hacked up feel to the poem which mirrors the subject matter. Years ago uses longer, more complex sentences to narrate an ‘endless summer’. In contrast to Rejection which states definitely what Rejection ‘is’, Years Ago, starts with negation: a story of what didn’t happen, and ‘no’ markers, which sets up a mystery and creates an indirect feel. The regular stanzas, run on lines and longer line length create a measured, controlled feel, in contrast to the very short lines in Rejection, which lets the poet cut lines short to emphasise violent words and ideas, especially in the second stanza ‘ashes’, ‘bitter’, ‘pain’ and ‘skin missing’.