How do Writers Create Tension and Suspense? 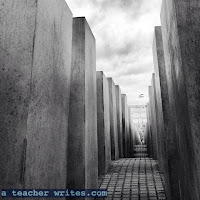 1. Long sentences - (1) writers create a list of fearful or worrying details, which creates an overwhelming, claustrophobic or intense feeling. (2) Writers build suspense by leaving the most shocking thing to the end of a long sentence. + Get more on how to build tension through sentence construction here.
2. Short sentences - punchy dramatic or abrupt facts are delivered in a shocking way that visually stands out. This can be particularly shocking after a long sentence.

3. Fragments - an incomplete sentence. Sometimes this gives the effect of confusion, ragged thoughts. The incompleteness of the utterance or phrase can create mystery, which increases suspense.
e.g. My leg!
Here, we know something's very wrong with his leg, but we don't know what.

4. Create mystery by giving incomplete information. Writers often give characters' reactions, before letting you know what happened, i.e. emotions, mood or reactions first, then facts.
e.g. Everything was still, silent. My thoughts raced madly. (but we still don't know how badly he's injured).

5. Exciting, uncommon and dynamic verbs create a sense of danger. This may also use onomatopoeia to create a violent effect:

6. In the first person, we feel very close to the danger, as if we're experiencing it too. Writers may include characters' thoughts.

7. The present tense e.g. running, or runs. This makes it feel as if it's happening right now.

8. Fear/action/violence contrasted with silent pause. This builds a foreboding (ominous) mood, as if something bad is about to happen. Do this in your own writing and see how effective it is. It's like varying short and long sentences.


1. character falls down hill bodily: external action / powerlessness
2. character thoughts: internal action
3. character pain: internal action
4. describes setting/ objects around him: zoom out to set events in context
5. analysis of situation: shows significance of danger, i.e. he will die if he can't solve this - reader is emotionally invested
6. he tries to escape: external action / struggle
7. he thinks about how people will feel when they find his mangled body: this refocuses on danger/death

Now you know how to create suspense!