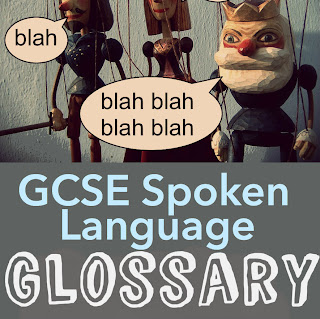 This is a brief summary of the features of spoken language as used in the GCSE Controlled Assessment. Common transcripts used are:


Pragmatics is the context of the message – e.g. age of participants, relative status, locations, job, hobbies etc.
Prosodic features – elements of spoken NOT written language, e.g. sounds like: grr, urr (eurgh), er, mmm
Idiolect – the distinctive way that an individual speaks (can be conveyed through styles used), ‘tone of voice’
Standard English vs Slang – slang is informal, colloquial words or phrases ‘wicked’ (good) or dialect ‘yarling’ northern dialect for ‘wailing’ (from Old Norse – as spoken by the Vikings), like Cockney rhyming slang. Received pronunciation is ‘standard’ or ‘posh’ English.
Jargon: any technical terms belonging to a group (teacher>student, religious people, military, car mechanic etc), e.g. ‘emotive language’ is a technical term – jargon – teachers use with students, but other people might not understand. It allows precise reference to a specialist idea/item. It is also part of shared assumptions.
Acronyms - abbreviations, e.g. NHS, or IT.
Colloquial - close to slang, where people use less formal or proverbial expression: ‘mum’ ‘dad’ (not mother and father), ‘take a hike’ ‘I’ll go for that’ (that sounds like a good idea).
Formal/Informal register (tone) can be patronising, friendly, intimate, ironic, over-friendly, formal, distant, etc.
*Back-channelling – giving feedback to show that the message is understood: most common in a conversation rather than an interview.
Turn-taking Notice how participants 1. Ask questions for a. information b. social bonding purposes 2. Seek clarification 3. Volunteer interesting information (gossip)  4. Ask further (often social bonding) questions to prolong the interaction 5. Echo the other speaker, to show/create cohesion (bonding)
Instant feedback speakers get instant feedback from paralinguistics (body language, facial expression) even if they don’t get an immediate response, or even if their partner doesn’t seem to answer their point directly.
Exclamations/interjections Never! Noooo! (incl OMG and LOL). These convey reactions to information given, conveying surprise, shock etc or showing that you ‘get it’. This can be a form of back-channelling.
Overlap is where turn-taking goes wrong, and both participants message at the same time.


Fillers - um, ah, well, you know, like, I mean. Sometimes repetition, like stuttering can be filling in time too. Comment on lots close together: is the person talking about difficult ideas or nervous.
False start - where someone starts then breaks off (because uncomfortable or confused).
Hedge - where someone softens what they’ve just said so as to weaken it, avoid causing offence or being too direct.
Elliptical expression –missing out words from a sentence, e.g. haven’t seen you for time (this is also slang).
Contractions e.g. cause (for because).
Unusual spellings acc (actually), hun (honey), luv (love), ta (thanks), probs (for probably).
Elision  - blending two words together, e.g. inoo (I know) wassup (what’s up) howzat? (how’s that?) dunno, gonna. To some people these are cringeworthy (ditto logograms and initialisms). To others, they are essential.
Subtext the hidden meaning to the conversation, i.e. the part of the meaning that the speakers don’t need to explain, i.e. shared knowledge, assumptions / or are trying to keep hidden (socially awkward elements are politely hidden).
Expected greeting: people usually open with ‘Hi’ or ‘Hello’.
Expected Sign off i.e. ‘bye’, ‘see you later’ etc
Repetition as always is worth commenting on. Usually it is used for emphasis, but also note repetition between speakers as a form of back-channelling. Sometimes repetition is a filler - as if someone is ‘stuttering’.
Inclusive language : we, us, can also be used to create a sense of group identity: it can also slightly dodge responsibility - rather than say ‘I’ cut spending, better to say ‘we’ did it. To say ‘they’ (the government) cut spending would feel wrong.
Appeal to the audience : using the second person, direct address, e.g. you, your.
Imperative verbs: e.g. go, take, buy, come here, are direct, straightforward forms that can be considered rude or aggressive. They might suggest that someone is used to getting their own way!
Subjunctive verbs : could, might, can  are all polite forms of making a request (more polite than the imperative).
Please, thank you are also ‘polite forms’ designed to smooth social relations during a transaction (or practical message).
Descriptive language: this is worth commenting on as speakers rarely use it. So when they do, it is there for an important reason often practical.
Sensory language, similes: these are worth commenting on too as they are rare. The speaker may be trying to get across a word picture of the scene.
Euphemisms - avoiding saying things directly, e.g. ‘loss’ for ‘death’.
Comparative: words like 'bigger' 'smarter' 'faster' 'more'
Look at what the writer is comparing. How to write about it: e.g. ‘the speaker uses the comparative ‘even sooner than’ which emphasises that the situation is worse and coming sooner than we expect.’
Superlative: words like 'biggest' 'smartest' 'fastest' 'most' - look at context: e.g. is the item the the biggest in the world, or just in that particular zoo? How to write about it e.g. ‘The speaker uses the superlative to stress the danger of the situation. He emphasises that the blue whale is the largest on earth, but seriously endangered.’

Rule of Three: A set of three words or ideas shows a rounded view: comment on which elements the speaker has chosen to include. This is a sophisticated feature of spoken language, and is often used to build an argument or make a case.

Get all resources on the Spoken Language Controlled Assessment for GCSE here.