An Inspector Calls Extract Question: How does Priestly Make this Such a Dramatic Moment in the Play 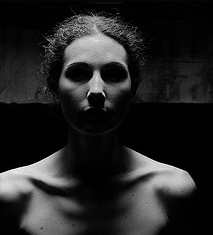 This is an OCR extract question:
How does Priestly make this such a dramatic moment in the play?
(The extract is the middle of act three, where Eric starts to get hysterical with his mother and the inspector accuses Mrs B of having killed the girl. It's on pages 54-55 in my edition)
This essay is 650 words and I'm not sure it's my best effort!

Make sure you comment on the stage directions...
The mood here is intense as we can see from the stage directions. Birling talks [savagely] and [angrily], while Mrs Birling’s reaction is one of being [shocked]. In contrast to his parents’ reaction, Eric talks [miserably], emphasizing just how upset he is by the truth of what he’s done. The intensity increases through the scene until he is [at breaking point] which suggests Eris is about to snap, while Mrs Birling is [very distressed now]. Mrs Birling is even rendered speechless at one point.

Then comment on punctuation, hyphens and fragments...
Her speech is broken up by the hyphens into fragments that don’t connect: ‘No-Eric-please’. The broken up speech echoes the collapsing self-confidence and complacency (i.e. self-satisfaction) of these very comfortable, middle class, wealthy characters. This is more shocking because of the contrast with how they were at the start of the play. Both Eric and Mrs Birling’s speech breaks up, which increases the effect. They turn their anger on each other.

What is the mood of the language? Pick up on violence, semantic fields, repetition and whether things are in or out of character? Do they use imperatives etc?
Eris uses violent language towards his mother which seems out of place in the elegant, eloquent world of the Birlings. He repeats ‘killed’ three times, and says ‘damn you’ twice. This is so shocking because of how much it contrasts with the polite, euphemistic language of earlier.

Is there a large shift in mood?
Eric, who is normally quiet, avoids the family and avoids confrontation, suddenly turns on his mother. This is a very dramatic confrontation. He is [almost threatening her] and accuses her of killing, and Sheila reacts with fear while Birling becomes [furious] describing him as 'hysterical'. Emotions now are at fever pitch. The family has turned against itself. Each of them accuses the other, trying to avoid blame. Then the Inspector intervenes abruptly, shouting ‘Stop!’. Then he talks in a calm way. After the hysteria, this is a strong dramatic mood shift. Everyone is quiet, and this might even make the audience feel uncomfortable as the theatre would be suddenly very quiet.

Everyone has just been blaming each other, but now the Inspector passes judgement. The tension that has been building through the whole play, as if the family is on trial for the death of the girl, will finally be released. It’s like a mystery where the mystery is not ‘who did it?’ (they all did), but whose fault it is. We get the sense that if one person can be blamed, the others will go free. To further build tension, there is a dramatic pause and the inspector [looks from one to the other of them carefully]. However, the Inspector then says ‘each of you helped to kill her.’ He is very emphatic (i.e. emphasising his point) using two short sentences in the imperative (command verb): ‘Remember that. Never forget it.’

How does this bring out the themes or moral of the play?
This would be a very uncomfortable moment as he fixes blame on people who have spent the whole play trying to avoid it. He uses the semantic field of murder ‘killed’ and ‘horrible death‘ to describe the crime. He wants them to ‘remember’ the terrible thing they’ve done. This is perhaps a moral for all of us: we avoid looking at what’s uncomfortable and would prefer to forget it than face up to it. He then fixes on Mrs Birling, who has all along protested her dignity and superior breeding, and says that she is guilty of ignoring the girl’s problem. This is particularly interesting because the Inspector shows that we can kill people indirectly: by not helping them. None of these characters has directly committed murder, but the Inspector says that is what they’ve done. In Mrs Birling's case, she did it by inaction, rather than action.

The author, Melanie Kendry, is an Oxford graduate, outstanding-rated English Language and Literature teacher of ages 10-18 in the British education system. In 2012, she was nominated for Pearson's Teaching Awards. As a private tutor, she raises grades often from C to A. Her writing is also featured in The Huffington Post.