Analysis of Disabled by Wilfred Own for Edexcel IGCSE Anthology 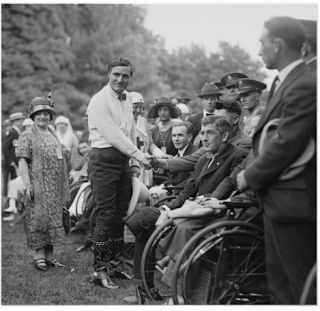 Explore how Owen portrays the tragedy of war in Disabled

Section ONE: Topic/Point of View/Narrative Structures > and their effect
Disabled is told from the point of view of a young soldier disabled in conflict and focuses on a vivid depiction of the unglamorous consequences of battle. It is told in close focus third person and zooms in on the slow boredom. The flashbacks create a shocking contrast of before and after: a picture of damaged youth. The most disturbing aspect is how close together before and after are: only a year ago, ‘there was an artist silly for his face’. Now he’s paralysed in a ‘ghastly suit of grey’. As an officer in World War I, Wilfred Owen had first hand experience of young soldiers invalided home, and this is reflected in
the close-focus pathos (pity) which at the end of the poem is spoken in the voice of the soldier, who asks ‘Why don’t they come?’ – with no hope of getting a reply.
Section TWO: Structure > and its effect
In Disabled, Owen uses iambic pentameter, which flows as naturally as speech from line to line as the narrator tries to reason ‘why’ the boy got into this situation. This gives a quiet, conversational feel, which is unusual in war poetry. It adds to the effect of quiet, everyday tragedy. Long sentences add to the irresistible flow, especially in lines 16-20, where the unstoppable movement echoes the loss of blood in ‘poured’, ‘leaped’, ‘lapsed’ and ‘spurted’. The interlaced, perfect rhymes – abacbc - give a certain dignity to the boy’s suffering, but seems to tremble down the line.

Section THREE: Imagery, Semantic Fields and Other Techniques (focussing on one poem only so that analysis of –how this poem explores the tragedy of war- is properly developed.)
One of the main techniques that Owen uses is flashback, juxtaposing past hopes of ‘then’, with the dark reality of ‘now’. The flashback uses the semantic field of spring in ‘budded’, ‘warm’, ‘glow’, contrasting it with images of old age: a ‘ghastly’ ‘grey’. Owen contrasts point for point the ‘leap of purple’ with ‘one time he liked a bloodsmear down his leg’, highlighting the contrast between the glamour of team sports, and poster imagery of war, with the reality. The basis on which he joined up is shown to be hollow, largely based on costume and ‘look’: ‘kilts’, ‘jewelled hilts’ and ‘daggers in plaid socks’ are dreadfully superficial but take up almost half the stanza. The rest is a long list of noble ideals and practical details like ‘pay arrears’, ignoring the danger.
For this boy, joining up was all about image, and the judgements of others. He reflects that he joined ‘to please the giddy jilts’, whose eyes now ‘passed from him to the strong men that were whole’. It is as if Owen wants to show how precisely wrong he was, point for point as the boy reasons through his situation. The stark reality of the situation is drawn out in absolutes like ‘never’, which is particularly tragic in one so young...
[get more detailed interpretation and the end of the essay]