Location and Setting in the Woman in Black GCSE Analysis 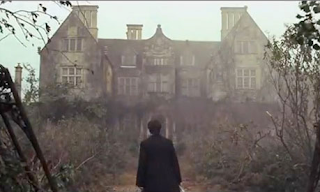 Is Crythin Gifford a real place?  No. Susan Hill says she imagined the place being anywhere on the East Coast of England between Whitby/Scarborough and the Essex marshes. She does mention 'Crewe' but says in an interview that she just put this in to confuse people. She may be using a mixture of Dickens (Essex) and Dracula (Whitby). Dickens' famous novel, Great Expectations begins on the Essex marshes:

"the marsh-mist was so thick, that
the wooden finger on the post directing people to our village ... was invisible to me until I was quite close under it. Then, as I looked up at it, while it dripped, it seemed to my oppressed conscience like a phantom devoting me to the Hulks.
The mist was heavier yet when I got out upon the marshes, so that instead of my running at everything, everything seemed to run at me." Chapter Three, Great Expectations

Notice also that Great Expectations is about a child adopted into wealth with tragic consequences, as is The Woman in Black.

The location of Criffyn Gifford, and particularly Eel Marsh House is isolated, natural but also unnatural and eerie seeming at the same time. The place where land becomes water and melts into the misty air is a liminal* place - * of thresholds, borders where things are constantly shifting. Link this to the ghost of the woman in black, who is dead, but still roaming the earth.

The idea of drowning dominates: Samuel Daily tells Kipps about 'drowned churches' and 'swallowed up village' with a 'wild ruin of an Abbey' and a 'handsome graveyard'.

Kipps almost drowns in a bog when he loses his footing in the treacherous mist. The Nine Lives Causeway to Eel Marsh House is visible, varying with the tides.
Nine Lives = cats are said to have 'nine lives' a superstious notion that suggests death is coming and can only be delayed for a time.
Eel = a slimy, black, sharp toothed fish. The long vowel and liquid (l- sound) creates a slippery, sinister mood.
Marsh = a boggy place where few things grow, and people sometimes drown.

How is Location used to Create a Sense of Isolation?
Eel Marsh house is physically cut off and the Nine Lives causeway functions as a lifeline back to humanity, which is frequently impassable, trapping Kipps in the house. Even when the causeway is open, fog and mist frequently descend without warning, making the way too dangerous to use.
Weather is used throughout to set mood, in Monk's Piece, and in London. Hill explicitly references the link between mood and weather.
'miserable weather and lowering to the spirits'

London is described using the semantic field of hell and damnation. This builds tension and foreboding and can be linked later to the mists on Eel Marsh and the ghostly figure Kipps sees.
'pools of sulphurous yellow light' (sulphur is associated with hell, as volcanic eruptions usually throw out toxic clouds of sulphur, heat, magma causing vast destruction) 'red-hot' 'some circle of the Inferno' (this references Dante's Divine Comedy, The Inferno, where he describes the 'circles' of Hell, each worse than the last), 'the pit below' (Hell is often referred to as 'the pit') 'evil red smoke', 'red eyed and demonic' 'like ghost figures'.

Fog and mist are personified, as if a thing with dark intentions. It is also something which blots out reality, rendering people blind, where they can only hear, and fail to understand or find their way.
'disguising the familiar world' 'confusing' 'choked and blinded' 'stumbling' 'clutched... for guidance'
'the fog that pressed itself against the window, like a furred beast at my back.'

Darkness is used in a similar way later.

November is the month of the dead. The first of Novemner is All Souls, or All Hallows Eve, i.e. the day after Halloween, a festival where children dress up as skeletons etc to mark the thinnest part of the year, where the dead and living are closest. Notice that Mary Shelley set Frankenstein in November:
'It was on a dreary night of November that I first beheld [the monster]', Frankenstein.
Compare this to where Kipps refers to November as: 'the drearest month in the year,' and later talks about 'that same dreariness'
Notice that Frankenstein is about revenge, and the undead - as is The Woman in Black.
Author Test Blog