Now read Source 2, the article and the picture which goes with it called, Trapped Chilean miners: rescue drill reaches their refuge at last by David Betty. 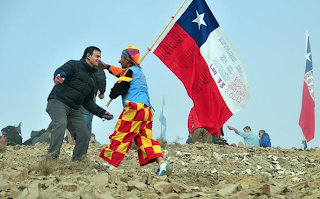 2. Explain how the headline and picture are effective and how they link to the text. (8 marks)
David Betty’s article discusses the issue of “33 trapped Chilean miners,” and expresses an excited tone, as the prospect of them being saved increases, which reflects the headline and picture.
The headline is quite sombre, before the colon, with the word “trapped” suggesting a melancholic article. After the colon, however, we see words, such as “rescue,” which is an antonym of “trapped.” It’s almost as if the pause created by the colon represents that after time has passed, hope is finally in sight or the pause could signify the previous opinions of the people and how that is beginning to change with “rescue” in sight.* *This needs a link to the content of the article ideally.
** This is a great paragraph with perceptive analysis of well-chosen quotations
Additionally, the second part of the headline is the article’s focus-point. The headline excites the reader for the prospect of the miners no longer being “trapped,” and this excited tone is reflected by the alliteration of the ‘r’ sound – “rescue,” “reaches” and “refuge” – which symbolises a drill slashing through the ground, further giving hope of the miners becoming free, which, as a result, excites the reader. This sense of anticipation makes the readers want to discover the success of the drill, and thereby read on.* Make a link instead: this is a generalised comment. >> what comes next is good though >> This hope that the reader has from the headline is not broken in the text, as we learn that it “has broken through into an underground chamber,” making them continue to feel hopeful.
In the text, we learn that “this is an important achievement,” which is possibly how the celebratory-styled picture and text can be linked. * you need to give a specific example > which the student does in the next paragraph. It would help the examiner if you put in the same paragraph
The picture includes a clown, wearing a brightly-coloured outfit. These light, primary colours reflect the happiness of the text, alongside this, they all express hope for the future, linking in with the headline. The clown figure is associated with happiness, and, since the text says “we can begin to smile,” the clown is symbolic of that.

Grade: 7/8 Band 4 (A-A*)
- offers a detailed interpretation of the effects of the headline
- presents a detailed explanation and interpretation of what the picture shows and its effect
- links the picture and the headline to the text with perceptive comments (this answer needed more of this)
- offers appropriate quotations or references to support comments
Short Video on What to Write About for Question 2

Indicative content
Candidates’ responses may include:
The headline is effective because:
It uses a large font and a colon which makes the reader pause for dramatic effect.
It tells the reader what the text is about- that miners have been trapped and that the incident took place in Chile.
The headline offers further detail –that the miners are in a safe place of ‘refuge’ and that the drill which will play a part in their ‘rescue’ has reached them.
The headline is effective also because it has used alliteration –‘rescue’, ‘reaches’, ‘refuge’ which is eye-catching and adds emphasis and drama to the headline.
The words ‘at last’ imply that the rescue effort has been a long one, which is confirmed in the text. The word ‘drill’ is a pun meaning the mechanical tool and the efficient process which characterised the rescue attempt.
The words ‘trapped’, ‘rescue’ and ‘refuge’ might also be explained with their effects.

The picture is effective because:
It is brightly coloured and the colours contrast.
It shows the desolate or harsh countryside where the miners are trapped.
It shows a reporter and a clown celebrating the news by being about to embrace. The reporter holds a microphone so he is radio or TV. His picture is more obviously relevant because he is reporting the story.
The clown is carrying what we assume to be the Chilean flag with things written in it. The clown is eye-catching, unusual, maybe bizarre and his place is less obvious. Interpretations might be: to represent celebration, happiness, colour compared to the surroundings, a carnival atmosphere of relief...etc. A very good interpretation would be that since the text speaks of the ‘media onslaught’ which we call a ‘media circus’ –the reporter represents the media and the clown represents the circus.

Links to the text:
The text explains what the headline means especially the words ‘refuge’ and ‘at last’ with details about the time scale. The text relates to the picture because it refers to ‘celebration’, ‘journalists’, ‘remote hillside’ and ‘media onslaught’.


If you're a teacher and would like to use it in class, please include the attribution (c) 2013 Melanie Kendry www.ateacherwrites.com