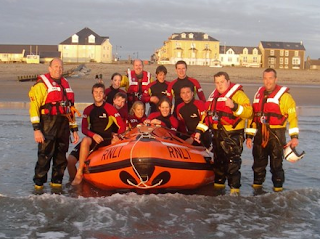 1. Read Source 1, Lifesaving with Class, by Rory Stamp, from the RNLI magazine, the lifeboat
What do you learn from the article about the Beach to City programme run by the RNLI? (8 marks)

In Rory Stamp’s article, we learn about the “RNLI charity and its lifeguard service.” The organisation is spilt into teams, with each team tackling a specific region, comprised of “an operational RNLI lifeguard and a beach safety supervisor.”

We learn that their programme is aimed at “primary school children,” from which we can infer that they’d require large amounts of time to teach these children, so that they are able to remember them. What we then learn, however, is that they only have “40 minutes” to teach the children about “how to identify lifeguards,” “understand beach flags and their meanings” and about the charity itself. Of course we interpret that many children will find “40 minutes” of lecturing demanding, and, quite possibly, boring. But the charity have considered this, by structuring their lessons in a way that makes them “memorable” and “fun,” through RNLI’s integration of activities, such as “play-acting,” to keep them engaged, and hence take more out of the session.

The company’s purpose – “educating children on the dangers of the seaside and how to stay out of trouble” – would make us believe that this programme would be more suited, and hence targeted at, children who live closer to the seaside. But we soon realise that this isn’t the case. One interesting piece of information that we learn is that “close analysis” has shown that “children living away from the coast…have been highlighted as a high-risk group.” This shows that RNLI have taken into consideration the areas most affecting, portraying how much they want to help.

It is emphasised that children are not knowledgeable enough about the dangers of the seaside, as Duncan Wood expresses, as he comments on how some children misunderstand inflatable toys, sharks for examples, for the real thing, which further emphasises the importance of this scheme.* incorrect understanding - the point is actually that while children perceive 'sharks' to be the major danger, it is actually 'inflatables' that are dangerous as children are swept out to sea on them (etc)

Overall, I learn that RNLI are a charity that set out to help “primary aged children” become more aware of “the dangers of the seaside” and by doing so, they hope that the number of seaside accidents will decrease.
Scroll down for the grade and examiner's comments:


Grade:
This answer would score about 6/8
There is a slight issue here with over-long quotation. It would be better to summarise more in your own words - to show more in depth understanding - and hit more points more quickly.
In order to gain an A-A* (7-8 out of 8), the answer would need to do most of the following:


The Beach to City programme is run by the RNLI to bring awareness to young people about being safe when near water. ** not mentioned in the student answer above
The programme also makes young people aware of the existence of the RNLI and Lifeguards and the good work they do as a charity -about which there is very little knowledge in some places. ** not mentioned
Primary aged school children who live in cities are targeted because ‘incident statistics’ show they are more ‘at risk’. They live away from the coast and so don’t think about the need for or work of lifeguards and being safe around water. √ covered fairly well
The programme uses ‘plenty of play acting’ and fun activities to make the safety messages memorable which, with ‘equipment to get to grips with’, would engage children and help them retain the lessons. √√ covered well
Important basic messages are learnt during the sessions: about sun protection and danger flags on holiday beaches and the fact that people are always having to be rescued from ‘drifting inflatables’ and only realise their danger when it’s too late. **dangers are not explained in enough detail
The programme also focuses on cities where there are inland waterways like canals, such as Birmingham and London and teaches young people how to use safety equipment available to the public. **not mentioned
The programme is going to be extended in the future. **not mentioned