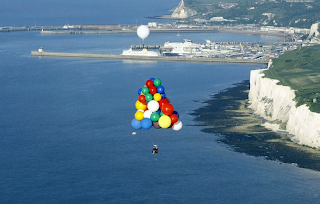 
ENG1H Question 2 June 2011 Model Answer
'Up, up and away - the day that armchair travel really took off'
Explain how the the headline and picture are effective and how they link to the text.
The headline 'up, up and away' juxtaposes the idea of the 'armchair' which is associated with stability and comfort. The use of the word 'up' is associated with the Disney film Up which is a fun family film as the headline and picture shows intertextuality between the two. The text also makes a reference to the film, stating that Jonathon Trappe 'strapped himself' to the chair tied with dozens of balloons. The repetition of 'Up' also shows the reader that the article is about travel using the lexis of travel gives us an insight into Trappe's peculiar story. The chair travelled across the English channel, relating to its headline that the chair 'really took off' travelling many miles across the sea.
Although a pilot, Trappe was not fully equipped for such an unreliable source of transport as he had no 'immersion suit'. This is presented in the iconic picture where Trappe is shown dangling from balloons in the 'exceptional' English channel. The brightly coloured helium balloons connote that Trappe thought his 'wonderful fantasy' was his idea of 'fun' and 'adventure'. The effect of the spectacular picture, of the bright red balloons against the blue sea shows that 36 year old Trappe is living a 'dream'. Trappe's idea of adventure and fun creates an iconic and interesting article, presenting fantasy and animation in real life.
This answer above is 224 words, just under one side of small handwriting. It is a little on the short side and does not make links quite as clear as it could. It would score 6/8.

The title uses two puns - 'up, up' and 'armchair travel' - creating an upbeat, child-like mood to the article. This links to the text where it explicitly references the children's Disney film 'Up' - also contained in the words of the title. The picture of Trappe's balloon-travel strongly resembles the Disney film, which may have inspired his voyage. This links to the text where Trappe describes his dream of grabbing 'toy balloons' - again emphasising the child-like, even childish qualities of the attempt. However, the word 'really took off' shows that this 'fantasy' - in the text - has become reality.

The repetition 'up, up', has a jaunty, upbeat feel, and the colours of the balloon are vivid, like a children's party, incongruously dangling above the flat blue sea far below. Juxtaposed against this is the perilous height, and the jagged, brilliant white edge of the iconic cliff of Dover, a familiar sight to those who 'cross the channel', but a very surprising - even dangerous - mode of transport. In the background, we can see the usual ferries lined up, which seem small compared to the mass of balloons and the tiny figure dangling below. This links to the text, where the author, Low, quotes from Up to comment on the incongruity - 'you know, most people take a plane'. The mixture of familiar and unfamiliar in the iconic picture of the White Cliffs links to the text where Trappe references the 'iconic ribbon of water'.

The picture looks dangerous - the cliffs are jagged and the water seems far below. This links to the text where Low says, 'with luck' and 'ill equipped' suggesting that the journey may in fact be as dangerous and foolish as it looks.

The phrase 'Armchair travel' in the headline is a metaphor normally used to describe people who travel wishfully, in imagination, from the comfort of their armchair, at home. This is ironically made literal as Trappe has 'strapped himself into a chair' to cross the channel. The technical term (jargon) in the text 'cluster balloonist' gives a professional feel to the expedition, which contrasts with the childish 'party-balloon' look of the picture.

The fun feel of the punning headline, with positive, upbeat words 'up', 'took off' contrasts with the suggestion in the text that this may not be safe. In the text, it says that the 'police' met the balloonist, giving a dark edge to the 'dream'-like and 'fantasy' edge of the picture. The image, which we may have seen in cartoon, is even more brilliantly shocking in real life and links to Trappe's final evaluation that this was an 'exceptional' experience.

The answer above is 420 words, one and a half sides of small handwriting and would score 8/8.