AQA ENG1H Model Answers Question 1 What Do You Understand from the Article?

Link to 'Will Turning Vegetarian Save the Planet?' 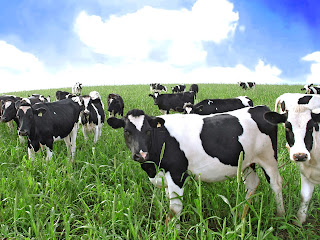 Alex Renton's article tells us not only can our diet affect our planet but that also 'rearing cows, sheep and pigs' produces more 'greenhouse gases' than transportation. This eye opener surprises us because of the publicity associated with greenhouse gases and transportation. Renton also tells us that the 'usual guzzlers' of mass produced meat are weighting down the environment because of the heavy carbon emissions.

Many people in authority are in favour of a 'vegetarian diet' because meat is a high contributor to greenhouse gases and causes a strain on our environment unlike the supposedly eco-friendly vegetarian alternative. Although many wealthy vegetarians are causing the same strain on the planet that the 'average meat eater' because 'soya' importing also causes emissions, but also 'deforestation', which is a major issue. Therefore, both vegetarians and meat eaters cause strain on the environment but in different forms and that one particular lifestyle choice is no better than the other. 'Food is responsible for 30% of the UK's greenhouse gas emissions' mainly because of 'livestock farming'. Once again this is another negative towards the meat diet. However, other facts such as the 'average Briton eats 50 grammes of protein' shows that we are eating more than we need and that we are also the cause of unwanted greenhouse gas.

Ultimately the production of food and greenhouse gases will become worse as 'poorer countries develop' and there will be a higher demand for meat.
This answer is 240 words long, and is just about one side of small handwriting. It would score roughly 7/8. It interprets the question, is thorough and makes some perceptive points.

Renton starts with the surprising fact that 'livestock farming' is a hidden, but major contributor to greenhouse gas emission - causing even more than the more well-known factor of 'transportation'. He cites the shocking statistic that 'cows, sheep and pigs' contribute a huge 30% of Britain's total. He then zooms out globally, and says worldwide, meat-eating is the real factor that is hugely stressing the planet, and which will make supporting the projected population growth 'peak' at '9.2 billion' in a mere '40 years' time', impossible. He seems to argue however, that this difficult problem can be 'quite easily' solved by changing diet.

He suggests that to 'change people's diets' is the solution, and it seems that 'it's better for the planet if you're a vegetarian, right?' However, his question hides some irony: it isn't. We expect vegetarianism to be the eco-friendly option, and indeed the authority, 'Lord Stern' seems to support this in the simple declaration: 'A vegetarian diet is better'. However, further down the article, Renton points out that 'rich world' vegetarians are eating 'soya', which is equally destructive - with 'deforestation' a particular issue. It seems then that the issue is not so clear cut. The problem is a rich world vs developing world one: our eating habits are luxurious and destructive. 'Mass produced' meat guzzlers are singled out as a particular problem. The so-called 'cheap' meat has a high cost to the environment, as it is transported further and more of it is consumed. In the end, Renton does not want meat eating to disappear, saying that he loves the 'red stuff', which he says has shaped our countryside. But perhaps we should treat it as more of a luxury, eating less, higher quality locally reared meat, so there's more to go round for developing countries, and for our 'grandchildren' in the future.

This answer is 300 words, is super-thorough, so if you want to know what a 'perfect' answer would look like - this is close.