'Give' by Simon Armitage, for AQA Moon on the Tides. Analysis to B Grade 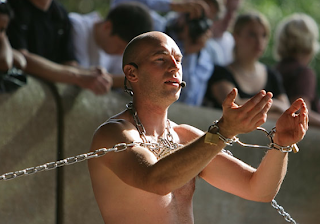 Basic AnalysisA man is begging a woman(?) for love, which she will not give to him. Armitage uses the imagery of homelessness to show he's lost without her. Then he uses theatrical imagery to get across how far she controls him. He will perform any ordeal for her, and creates a kind of ladder of favours which he ranks 'copper', 'silver', 'gold', 'frankincense' and 'myrrh'. He says he's trapped in 'chains'. Then he complains that she only gives him 'tea' - a metaphor for almost nothing. He wants more. This is a poem about unrequited love.

This is a lesson I did for a student who does not get poetry. We're working through the essay bit by bit, so check back if you want more! We're currently trying to figure out how to use a Point-Quote-Comment (or Point-Evidence-Explain) structure with enough detail to pull him up to a B-grade.

The question we're using is this:

How does the writer present the relationship in 'Give', by Simon Armitage?

I explained that when I first look at a poem, I have these questions in my head:

So this is the introduction that I wrote:


'Give' is spoken by someone, maybe the poet, who is desperate because he is in love with someone who does not love him back. He is pleading with her. The theme of the poem is unrequited love.

The next paragraph deals with the first stanza. If in doubt, this is a great way to write about a poem. At the very least, it makes sure you're thorough. CAREFUL that you don't just re-tell the poem though:


[POINT] In the first stanza, it feels like he's talking to her. [EVIDENCE/QUOTE] He calls her 'dear'. [EXPLAIN/COMMENT] This suggests closeness (intimacy), however, he is in 'public' making 'a scene' [EMBEDDED QUOTES], which shows [COMMENT] this is a relationship gone wrong - or - it never started in the first place. [LANGUAGE ANALYSIS] The plosives (p,d,t,b) in 'public places dear' give quite a violent mood, as if he's cross with her. [STRUCTURE ANALYSIS] Each stanza ends abruptly with a full stop, as if he's banging down his points in a clipped, angry way.

[POINT] In the second stanza he gets across an image that he's homeless. [EVIDENCE/QUOTE] Words like 'doorways' and 'street' and that he'll sleep 'under the stars' show this. [COMMENT] This metaphor suggests that he's got nothing without her and no home. And it makes him into a beggar, begging her. We see this later where he says 'I beg of you.'

This is as far as we've got so far! Check back though because we'll be adding more...
Get more Simon Armitage here.
Get more AQA Moon on the Tides Analysis
All GCSE and IGCSE