GCSE English Language Exam Writing Section: Annotated Essay 'The Best and the Worst Food I Have Ever Eaten' 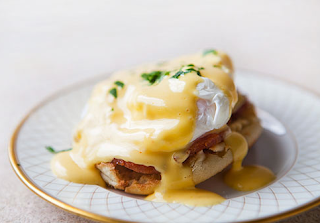 ATeacherWrites.com
This is a question set in June 2013 for the Writing Section of the GCSE AQA English Language exam. The answer below is written by me, and you can read a clean version, without annotation here.

To start with, I should probably say that this took me an hour, I did it on my laptop and revised and re-drafted it. I could not have done this in the 30 minutes or so that you'd have in an exam. The whole thing is 600 words - roughly two sides of small writing, or three of medium.

The Best
[this introduces the meal, which you'll notice is only a very short description right at the end. I mean, how much can you actually write about eggs and bacon?!? So I introduced the background and setting in more detail to create a build up]

The best meal I had was stolen. [short sentence, surprising start. The idea it was 'stolen' builds tension] I wasn’t supposed to be in the Swan Bar at Shakespeare’s Globe; [this is how to use a semi-colon correctly] I was supposed to be meeting an old friend, staring at objects in a museum and having an intelligent conversation. [rule of three] But my friend had lost his phone - so I lost him. [repetition for effect, plus dash] What now? [short rhetorical question]

The museum cost fifteen pounds to get in. Eggs Benedict was only eight. [these two sentences are balanced - same sentence construction - to lead into the conclusion which comes next] Much as I love, a. Shakespeare and b. staring at objects, I love food more. Sorry, Shakespeare, but you cannot compete with bacon. [antithesis of Shakespeare and bacon is meant to be funny: there's also a repetition of the 'c' sound 'cannot' 'compete' 'bacon']

Tucked into a corner, by the intricate wrought iron gates that open onto the Thames riverside, the Swan doors open into a mix of pub and restaurant, empty but dotted with light on this grey November morning. [long, complex sentence, unusual start, lot of sensory language 'empty', 'dotted', 'grey' and 'light' - there's more sensory language in the next sentence - 'dark', 'muted' 'softly padded', 'warm'] The dark wooden floor, muted walls and softly padded window seats take you like an embrace. Warm, friendly and knowledgable staff are quick on the mark without being obtrusive. [good vocab in this paragraph: 'intricate', 'knowledgeable' and 'obtrusive'. There's also a simile: 'like an embrace']

When the food arrived, every part of it was perfect [alliteration]: thick cut dry-cured local ham flashed [unusual verb use] over a melting hollandaise sauce. Notoriously difficult - hence its luxurious quality - this hollandaise was fiercely fresh, the blend of smooth, buttery textures and slight tartness, harmoniously pitched. A plump soft egg oozed warm yellow yolk over the new-baked bread which was exactly the right amount to mop it up. Which is exactly what I did.  [this is a fragment used for effect] [good vocab: 'notoriously', 'luxurious', 'textures', 'tartness', 'harmonoiusly'] [there's a huge amount of sensory language here]

My mum’s a magician in the kitchen. [metaphor, alliteration, rhyme] She can take a soft pink steak [sensory language], put it in a pan and out comes the stuff of dreams. [metaphor] Slapped on the plate, on a bed [plosives] of yellow lettuce is half-charcoal brick, half meat-ice cream [assonance]. Did I say dreams? I meant nightmares. [< antithesis >] It’s black on the outside and frozen inside. The three milimetre layer that is cooked has the taste, and texture of a tyre, lurking just below the carbon crust. [alliteration] Peel it up, give it a chew for an hour or two. [rhyme] This is meat as meat is roasted in hell, fed to the damned with red-hot forks. [extended metaphor]

I’m not sure where my mum learned to cook. What mad chef, in what feverish land of sweats and shakes and vomiting, [rule of three, hyperbole] devised this slap-and-dash to the toilet approach to perfectly edible ingredients? [rhetorical question] It’s a special kind of alchemy. [command verbs, imperative, also interesting verbs >] Take a plump red steak, then freeze it hard. Remove from the freezer five minutes after mealtime and blast it in the microwave till the outer layer is brown, rubbery and bubbling. Plop [plosives] it in a pan when the oil is about to burst into flames then wait till the smoke alarm goes off. Chisel it out and you’re ready to prepare the salad. [This paragraph is packed with hyperbole]

I say prepare. [short sentence for effect just before a very long list used for effect >] What I really mean is rummage frantically in the fridge, knocking out three bowls precariously stacked and smash them on the kitchen floor, splattering a baked bean, pasta and mashed potato medley up the kitchen units. [command verbs, imperative>]Wipe, curse vigorously, cut yourself and curse some more, knocking a bottle of medicine out of the kitchen cupboard as you search for the plasters you know you haven’t got. Bleed a bit more. Once you’re bleeding less, fetch out a week-old lettuce, peel off the plastic and the liquified outer layers, wet it thoroughly and prise a leaf onto each plate where it will wait, patiently, until it is scraped into the bin along with the outer and inner layers of your steak. [this paragraph uses extended hyperbole, a lot of lists and makes fun of the style of cookery books]

A week later, remember the chips that you cooked to go with it, a greasy black layer welded to the baking tray in the oven. Bon Appetit!

Get the clean, unannotated version here.

If you're bored, and want something else food-themed, you have got to see this. You might die laughing though...

The God of Cake More About the Author
I'm bored! Show me Something Interesting...
Watch Videos
AQA Page
All GCSE and IGCSE