Elements of the Gothic for AQA A2 English Literature B Exam 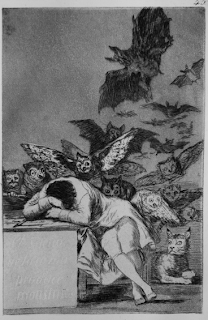 Welcome to the melodramatic, magnificent world of the Gothic! Discover damsels in distress, angry women, humane animals and beastly men, the natural, supernatural and the unnatural. Enjoy transformation, transgression, claustrophobia, madness and explosive passion. This page is packed to the limits with resources for Elements of the Gothic for AQA English Literature B at A2, and for the optional Gothic Unit on the International Baccalaureate (IB) in English. Bookmark it now, before you forget.
Past Papers: Exam Questions for AQA Lit B
+ for Elements of the Gothic: All Texts
+ The Bloody Chamber
+ Macbeth

+ 'The Bloody Chamber' 'A Bloody and Frightening Tale'. Discuss. [1] The title 'Bloody Chamber' contains 'bloody', but can be interpreted in two ways: either as a murderous chamber - which we find in the story, or as a pun meant to refer to the womb, suggesting this will be a story about the female condition as victim of male violence as in the 'Bluebeard' story collected by Perrault. Here, a new bride unlocks the forbidden room in her husband's castle to find the murdered corpses of his former wives... [read more]
+ 'The Courtship of Mr Lyon' and 'The Tiger's Bride'  In an interview [with] Anna Katsavos, [Angela Carter] defines myth as “ideas, images, stories that we tend to take on trust without thinking what they really mean, without trying to work what (they) are really about.” According to Paulina Palmer, if on ... [read more]
+ Narrative Point of View in Wuthering Heights  In Wuthering Heights, Bronte uses a frame narrative to tell the story of Cathy and Heathcliffe’s romance. This is typical of gothic novels like Frankenstein, and later, The Strange Case of Dr Jekyll and Mr Hyde, where we enter the story through a series of doors - or narrators... [read more]

+ Essay ideas for: 'The Gothic is a male genre which either excludes women or presents them negatively. Discuss.'
+ Essay ideas for: ‘A sensational and shocking genre.’ How far would you agree with this assessment of the Gothic genre?'

Themes and Context
+ Desire: Freud 'The Pleasure Principle', the Id, the Ego and the Superego  Sigmund Freud 1856-1939, was one of the first psychologists - writing about how we think, and why. His ideas give us an interesting way of understanding literature. His theory of the Id, the Ego and the Superego, from his essay, 'Beyond the Pleasure Principle', (1922), is particularly interesting when studying the Gothic. In Gothic novels like The Strange Case of Dr Jekyll and Mr Hyde, Wuthering Heights,Macbeth, and The Bloody Chamber... [read more]

+ Entrapment, Claustrophobia, Horror and Terror, Ann Radcliffe  It's every Gothic writer's favourite scenario: someone's trapped - either chained up, strapped down, or tucked away in some dank cell, castle, cellar or cloister. The physical entrapment and claustrophobia symbolises psychological limitation - of narrowness, or the confines of society, and the expectations of others. The physical claustrophobia symbolises the psychological limitations which cause mental pain...  [read more]

+ Context and History of the Gothic Novels, Art, Architecture and Poetry Horace Walpole's novel, The Castle of Otranto (1764) is usually described as the first gothic novel. What makes it 'gothic'? It's set in medieval Italy with a claustrophobic castle, has a melodramatic plot, long-suffering females and uses archaic language. It starts with a character being crushed to death by a giant helmet, progresses through forced marriage, a curse.... [read more]

+ Mirror Symbolism in the Gothic Mirrors are a key element of the Gothic, symbolising: identity, sense of self, vanity, worldliness, sensuality - or an ethereal, ghostly other-world. For the Lady of Shallott they symbolise her isolation - cursed, she can only see the real world through a mirror which she weaves in a web. A mirror can be a door to an alternate...  [read more]
Technical Terms
+ The Genius List
+ Hubris Almost the first story in the Bible is about Hubris. In the beginning, God made creatures out of clay, 'in his own image' - aka 'people'. Then the people ate from the tree of knowledge and became clever, so God punished them by booting them out of Eden. A 'good life' thereafter is to return to Paradise by being good, and obedient. But what if people aren't obedient? What if they love their god-stolen knowledge and want to use it? ...  [read more]
+ Poetic Terms
How to Write an Essay
+ Advice from a top Public School
Open your essay by stating your understanding of the question. English essay questions often allow the writer some leeway – so now’s the time to state how you interpret the question (unless it is blatantly obvious).  In some English essays, there is a need to show that your understanding is one among other possible interpretations.... [read more]
+ Vocabulary for Essays
1 IN ADDITION
(1) besides this (as well as this), (2) furthermore (also), (3) also, (4) as well as, (5) on top of this, (6) foremost (most important, e.g. the foremost reason for the outbreak of war was...), (7)firstly, secondly, thirdly, (8) firstly, lastly, finally, (9) likewise (in the same way),
2 TO GIVE AN EXAMPLE
(1) For example, (2) for instance, (3) in particular, particularly (e.g. particularly important, was...), (4) specifically (e.g. Hitler bombed St Paul’s Cathedral specifically to destroy British morale)... [read more]
+ How to Write an Introduction
This post will focus on how to write the introduction, and make sure that when you start laying down track, it takes you where you want to go.
[1] First, highlight the key words in the question, like so:
How do the writers present love in these poems?
How does the poet convey intense feelings about the [subject]?  [read more]
+ How to Write a Conclusion
You've sweated ink all over the page for the last forty five minutes and now you're losing the will to live. What next? The conclusion, of course! Here are some quality tips from the masters at major public schools.
'Make sure you finish convincingly. A vague summing up will blunt even the sharpest of arguments, and will dissipate the essay’s energy. Rather than ‘winding up’ in general terms, finish on a specific, provocative point. As with your opening, your concluding statement should be...  [read more]
+ Words Every Brilliant Person Should Know
Boost your brainpower with this sublime collection of scintillating words. How many do you know already? Get the definitions below ... [read more]