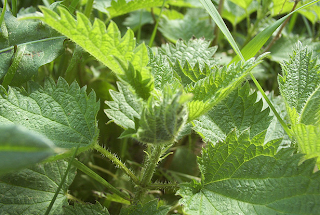 ATeacherWrites.com
How does Scannell portray relationships in his poem and his war experiences in ‘Nettles’? (30 Marks)

The poem ‘Nettles’ was written by the acclaimed war-poet Vernon Scannell who has written this poem to portray the typical father-son relationship. Personally, it seems quite likely that Vernon Scannell has targeted this poem at parents, as they would be able to relate to the perspective and feelings of the speaker, since only a parent is capable of understanding the agitation the speaker feels when his son is hurt. Additionally, the poem is a conceit for Scannell’s war experiences, which gives it a darker meaning.

The metre used establishes the father’s love for his son. The poem is written in iambic pentameter, which creates a da-dum pattern throughout the poem. The ‘da’ sound could almost represent the father trying to fight these “regiments of spite” in an attempt to protect his son from the menacing world, whilst the ‘dum’ sound is more plosive and thereby symbolises the father being knocked down by these inevitable forces of nature as “the busy sun and rain” causes his “son [to] often feel the sharp wounds again.” Not only does the use of iambic pentameter portray the father’s constant, and inevitably futile, battle with the “nettles” it portrays his war experiences too – it gives the poem an almost systematic rhythm, similar to marching, perhaps to link in with the military them, as well as to reinforce that any attempt made by the father to fight against these inevitable forces is futile.

Furthermore, there are a lot of adjectives that are used in the poem to suggest the vulnerability of the boy, which is juxtaposed by the adjectives and verbs used to describe the invincibility and strength of the Nettles. In the very first line Scannell purposely uses the boy’s age – “three” – to indicate the boy’s vulnerability, which is then followed by the verb “fell” to show that this was an accident. Later in the poem, we see adjectives such as “tender,” which are symbolic of the boy, who has tender skin, which makes the reader interpret that he is innocent and vulnerable. However, Scannell then juxtaposes this innocence of the boy with the “nettles.” The speaker “slashed” and “honed [his] blade.” The word “slashed” connotes quite an aggressive action, which shows how much strength the father must put in to win his battle. Additionally, the word “honed” shows how sharp his blade must be. Others reader may say that the verb “honed” shows the father relentless desire to protect his son from the dark and menacing world. This contrast between the boy and the nettles could be symbolic of the contrast between Scannell and the other members of the army. Scannell didn’t want to be in the army – he even ran away twice – and he wasn’t able to run away as the army hunted him down, and like nature will fight back, the army will hunt you down, if you leave without consent, like he did.

The metre also has significances with a sonnet form. The poem is written in iambic pentameter, which makes it perfectly capable of being a sonnet, yet Scannell decided to write in quatrains and include two extra lines. The two extra lines could symbolise Scannell being rebellious again, like he was in the army – he abandoned all his responsibilities and didn’t follow the rules in the army, like he isn’t following the rules for a sonnet. In addition to this, another might say that the total of sixteen lines could represent the age up until a child and his father have a secure bond and that after that age the father can no longer protect his son and has to allow him to face the world alone – indicated by the ambiguous last line in which the father could possibly be letting his son go into this dark world alone.

Moreover, the rhyme scheme is systematic and ordered, as it follows a strict pattern of alternate rhymes with “bed” rhyming with “shed” and “it” rhyming with “lit,” and so forth. This strict pattern creates a tone of order and control – as if the father is trying to manage his strength of feeling – or indeed as if he is trying to control his environment in order to protect and shield his son from pain.

Lastly, the imagery created within this poem creates a sense of a battle being fought. Scannell uses a conceit of war, with nettles being referred to as a ‘regiment’ on ‘parade’ that return as ‘tall recruits. ’ The semantic field of ‘pain’ – created by ‘raw’, ‘sharp wounds’ and ‘burn’ – deepens the juxtaposition of the child’s physical injury, as well as the parent’s emotional pain, which is somewhat contrasted by the language presented the child as vulnerable and innocent.

All in all, the poem communicates a relationship that is a common occurrence in our society, allowing many parents and even children to relate to this poem, with Vernon Scannell also highlighting his experiences in the army as being menacing and ominous.

Thanks to Aaran for this analysis!