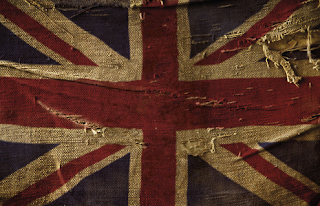 ATeacherWrites.com
Flag is tightly regular in its line length, rhyme scheme and in the refrain ‘it’s just a piece of cloth’, which repeats in all but the final stanza. It feels very controlled. This control allows the poet to explore the meaning of the same ‘piece of cloth’, or flag, from multiple angles. In the first line of each stanza, the language is literal, not metaphorical. Agard describes the flag in factual terms as ‘fluttering’, ‘unfurling’, ‘rising’, ‘flying’. The sounds here are light, free, full of soft, voiceless fricatives /f/ slipping into liquids /l/, which contrasts with the tight structure. These words connote freedom - even from gravity - as if the flags are escaping from the tight control of the poem.

In ‘Flag’, Agard explores the difference between the literal and the symbolic: literally the flag flies free. It is ‘just’ a piece of cloth - tiny. The results it produces, though, are vast. In stanza one, the flag ‘brings a nation to its knees’. The metaphor of slavery, subjugation and dominance in ‘on its knees’ contrasts with the vast scale of the word ‘nation’. The power of the flag - though symbolic - is literal and immense.

In stanza two, the cloth inspires bravery in ‘the guts of men’. Like ‘to its knees’, Agard uses colloquial, familiar language - to represent powerful emotional change in blunt terms. In stanza three, he moves from the ‘bold’ to ‘cowards’, dealing with the traditional antithesis of bravery vs cowardice. Nationalism and war polarises opinion: if you’re not with us, you’re a ‘coward’ - a negative, insulting term for what could be re-termed a pacifist.

If we re-examine the places the flag flies in the first line of each stanza, it’s on the battlefield: ‘pole’, ‘tent’ (combatants pitch tents in war), ‘field’ (as in battlefield). In stanza three, Agard tells us the ‘cloth’ will outlast ‘the blood you bleed’. The use of the second person directly addresses the reader as potential combatant - who will bleed in war. The word ‘outlast’ shows the transience of the individual and also the war. The movement of war is of nations, of centuries, making individuals disturbingly insignificant by contrast - yet Agard forces us to focus not only on an individual but on ourself. This abstract symbol of the ‘flag’ and the idea of war will affect us directly. Are we willing to put the glory or nation symbolised by the flag before our individual humanity?

In the final stanza, the mood darkens. Agard no longer interrogates the meaning of the cloth - asking ‘What’s that?’ Instead he asks how ‘I’ can ‘possess’ it. Here, he dramatises the question: how can we control or own the power of ‘such a cloth?’ This explores the individual desire for power, which is a disturbing idea next to the idea of ‘blood you bleed’ - as if even in the shedding of blood, it is power that attracts us more. We’re gripped by the fallacy that an individual could control it.

The final lines state that what seems ‘cloth’ (and is, literally made of cloth) is a flag - exploring the power of symbolism. No mere cloth could inspire such things: it is the concept that it symbolises. This is a poem about the power of ideas to corrupt in ‘guts’ in ‘blood’. In the final line, he uses the imperative: ‘blind your conscience to the end’. Here, end represents the bitter end, death or to the last. Conscience enables us to see right from wrong and it is this moral sense that Agard says is lost in war, and the frenzy of ideals.

(c) 2013 M Kendry This essay is just short of 600 words and would gain an A*. It was lovingly crafted  for you by a UK-based Oxford graduate, current GCSE examiner and an English teacher. Please link to this page, don't copy. Teachers, use this with the attribution http://ateacherwrites.com Thanks!

Get more Poetry essays here.
All GCSE and IGCSE