ATeacherWrites.com
How does the writer present the character of the Duke?

The Duke narrates this dramatic monologue, whose topic seems at first to be his antique collection. This sets up the theme of objects - and objectification, and possession. Browning leaves an impression of a man with a vast sense of self, status and control.

The possessive pronoun appears frequently, in 'my', 'myself', 'my favour'. His last wife seems to have no name, no clear identity except in relation to him, which is the only way in which he can conceive of her. Now, she is reduced to a 'piece' of art, safely contained behind a 'curtain'. Interestingly, half way through, the Duke begins to refer to himself in the third person: 'her husband's presence' (i.e. himself). He portrays himself in language that is distanced - as if suggesting psychological fracture - as well as self-conscious grandeur.

His sense of his own status is acute: he ranks his 'gift of a nine hundred year old name' high, and blames his last Duchess for failing to do the same. He uses the word 'stoop', or a form of it, negatively three times, to show his distaste for it. His disgust at her lack of discrimination, where he says 'twas all one' to her, suggests his is almost the revulsion of the connoisseur for the plebeian. It revolts him that she finds the simple and natural beauty of 'cherries', 'the dropping of daylight in the west' cause for 'joy' equal to any. The Duke name-drops 'Fra Pandolf' and 'Claus of Innsbruck' to show his status. In addition, he uses overly formal diction in 'pictured countenance', 'known munificence', with elaborate sentence construction: 'Will't please you rise?'. This formality shows the importance - to him - of highly polished surfaces. Beneath, we glimpse dark depths.

In places, the Duke's language begins to break up. Fragments, as dashes, appear half way through, at lines 31-36 as he attempts to articulate his disgust. He says 'She thanked men - good!' Ironically, his use of the word 'good' feels like a bad thing. He says 'she liked what'er she looked on' as if it were repulsive. To be 'too soon made glad' is to be easily pleased, which ought to be a positive quality. Twisted in the mind of the Duke, this becomes a negative.

The Duke is a fantasist. He imagines speech that was never spoken. He talks of Fra Pandolf as he was painting: 'perhaps he chanced to say'. The Duke adds elaborate, sensual detail to the conversation: 'mantle laps', 'the half-flush that dies along her throat'. It feels so vivid we could easily forget: the entire conversation is in his head. He even imagines conversation that he could have had with his wife, but didn't wish to 'stoop'. His speech in the poem is riddled with the subjunctive - 'if' and 'could' and 'if she let'. His word here, is the whole of the reality of the poem. But it is false. When he says 'her looks went everywhere', we are inclined not to believe him. And even if they did, his reaction is off-key. We must look. Or walk everywhere with our eyes shut. There is no evidence in this poem to justify his word choice here: 'just this or that in you disgusts me.' The Duke is the ultimate articulation of ego gone mad: destroying anything that does not fit perfectly with its sense of self.

How does the writer present the character of the Duchess?
We meet the Duchess obliquely - through her portrait, 'painted on the wall', which most of the time is hidden behind a curtain. In death, the Duke controls who may see 'its earnest glance'. Though he says 'there she stands', there is no one there.

He describes her 'depth and passion', suggesting underlying sensual traits, though it's hard to unpick the reality from his imaginings. He describes a 'half-flush', 'spot of joy', and 'blush', suggesting spring-like colour. Yet in the word 'spot', which he repeats, he also suggests the word 'stain' and the idea of corruption. When he uses the past tense for 'she had // a heart' the line break emphasises the finality of it, broken by the dash just before he says 'too soon made glad'. Instead we think: she had a heart, and now she has none.

The only sense we have of her speech is that she 'thanked' people, with 'approving speech' - all polite formalities - at best, an indicator of a kind and grateful nature. Words like 'courtesy' are associated with her, but also the flaw that she was 'too easily impressed'. Her joy, to the Duke, is insufficiently discriminating.

Browning does not take time to give a detailed description, as if the reality of Lucrezia (who is never named) is far less important than the Duke's perceptions of her. He dramatises incidents with a series of men: the painter, 'some officious fool', 'all and each' - 'anybody'. The list becomes increasingly general and vague.

He imagines her as a child or a prize pony to 'let herself be lessoned', as one who does not perform correctly in 'this or that', to 'miss' or 'exceed the mark'. The Duke measures her, and finds her wanting. His cold statement 'all smiles stopped' is chilling, particularly in juxtaposition with 'There she stands // As if alive' where Browning again uses the line break to create a break in meaning. Now, she's trapped forever. No one will look at her, nor she at them.

The relationship between Duke and his Last Duchess is one of formality, surfaces, of correctness - without intimacy.

Extras:
Story A Renaissance Italian Duke is talking about his antique collection. This includes a painting of his 'last Duchess' - who is now dead from smiling at everything and not just the Duke. Now he's looking for his next victim bride.  DO NOT write this in your essay! (It's just to help you understand what's going on!)

Background As this is a Robert Browning poem, you can figure out it's probably (a) a dramatic monologue (b) about murder. What you might not know is that this monologue dramatises a true story - of Alfonso Il d'Este, fifth Duke of Ferrara* (1533-1598) and his bride, Lucrezia di Cosimo de Medici. When they married, he was twenty five, she fourteen. By the age of seventeen, she was dead.
* you noticed the poem has 'Ferrara' written at the top in Italics, right? DO NOT write this!

Ferrara had a 'nine-hundred-years-old name' - at a time when that counted for everything; Lucrezia was given to him as a bride with a large financial gift (dowry), from her rich, but not-so-noble Medici family. It seems what Ferrara wanted was the money, not the girl. Shortly after her death, he sought to marry the daughter of the uber-noble Holy Roman Emperor, Ferdinand I. DO NOT write this!

Browning was inspired by this haunting painting of Lucrezia. 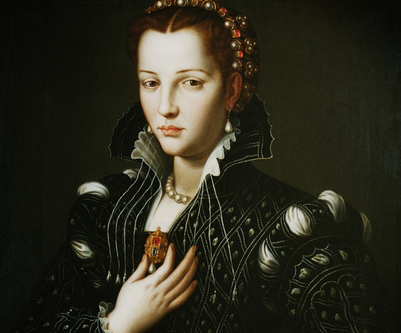 Get more Poetry essays here.
All GCSE and IGCSE