What is the Subjunctive? 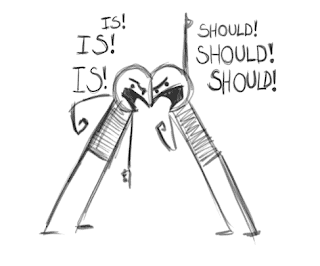 The subjunctive is a type of verb that deals with both 1. possibilities and 2. duties, or obligations. It's a word that goes in front of the normal verb. For example, the verb 'eat' can be coupled up with a whole bunch of subjunctives; the meaning is a little bit different each time.

I would eat an elephant but my mouth is not big enough.
I could eat an elephant if I had surgery to enlarge my mouth.
I can eat an elephant now my mouth has been made bigger, but I don't feel like one today.
This type of subjunctive is about possibilities. Clearly it's to going to be possible to eat an entire elephant which is why these sentences sound so silly. But not as silly as the ones below, where I've used the subjunctive for duties and obligations:

There's no context in which I will ever be obliged or duty-bound to eat an elephant. So what are the real world situations in which we'd use the subjunctive in its many magnificent forms?

The subjunctive also gives the possibility that it might not happen. It lets us speculate and explore ideas. The subjunctive is sometimes considered to be the 'polite' form. For example:

'Would you take the bins out please?'

This is a lot politer than:

'Take the bins out.'

It also works better than 'could' and 'can'. If you say 'could' or 'can', you're really asking if someone's capable of doing it. So you're basically saying: 'Are you capable of taking the bins out?'

The answer to this is 'yes, obviously'. No one empties the bin, though. It's a bit like that conversation where you ask someone, 'Can you tell me the time?' And they say 'Yes.' Then walk away


Examples of Subjunctive for Possibilities

The subjunctive is often used for advice. If you're writing to persuade or to argue and advise, you need to use it, along with imperatives.

'you should first talk to your child's class teacher or year tutor about the problem before taking further action. The teacher will usually be able to clarify the problem, provide more information and may be willing to support and work with you if this is in the best interest of your child. The vast majority of problems or areas of concern can be resolved in this way.'

We find this in Rudyard Kipling's poem 'If' where he gives his son advice on how to 'be a man'. This explores the idea that life is tough, it's hard to live up to the ideal, but we should try.

We also find it in 'To His Coy Mistress', by Andrew Marvell, where the narrator promises boundless love to his lady. He says he 'would' love her 'ten years before the Flood' (the story of 'Noah's Ark' thousands of years in the past) and let her hold out until 'the conversion of the Jews' (i.e. never). So in other words, the subjunctive lets him promise her something impossible, just like 'I would eat an elephant if my mouth were big enough'. He's making the point that she seems to be demanding the impossible.

It also appears in 'Futility', by Wilfred Owen. He says
'If anything might rouse him now, // the kind old sun will know.' The boy is dead. Nothing will wake him and the subjunctive here expresses an impossible hope.

2. Subjunctive for Duties and Obligations (deontic subjunctive)
Duties and obligations are hugely important in society. Think of the legal system, and the phrase 'duty of care'. If you cook food for someone you should take care not to give them food poisoning, or leave things about for people to trip over.

You might have duties at work, school or home: to do homework, turn up on time, turn lights off if they're not being used, do as you're told and help other people and not punch people in the face, even if they're really annoying you.

The subjunctive for duties is as follows. I've organised them in order of strength:
you ought to stop that
you should stop that
you must stop that

We also find this in writing to advise. It appears in poetry only very rarely. Poets use the imperative with impunity. But hardly bother with the subjunctive. Maybe because they have more subtle ways of showing (not telling) us what our duties are.

In fact, the duty-subjunctive probably best avoided in speech too as it makes you seem bossy (like the imperative) but gives people an opt-out. Moral of this post: if you really someone to do something, reach for the imperative.