A Game of Polo With A Headless Goat, Analysis plus Mark Scheme and Comments for the Edexcel IGCSE English Language 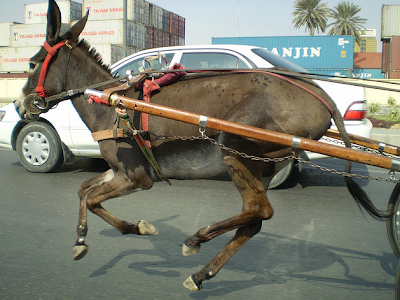 "Please would you comment on the answer I prepared for the question from your suggested past paper (25th May, 2012)?"


This answer is based on the Edexcel English Language Anthology Text 'A Game of Polo with a Headless Goat', aka donkey racing in Karachi, which is printed here with comments and the Edexcel mark scheme.


I've put some comments on your answer in this font, with the mark scheme below. Hope you find it helpful! Best, Melanie.

Question:
How does the writer try to share her experiences of being at the race?
Answer:
The writer, Emma Levine has tried to share her experience of being at a "donkey race in Karachi" in her travel writing piece as mentioned in the blurb.
Levine has made humour a major element since the beginning of the extract. The use of humour is exemplified when the write compares this race to the famous cartoon animations, "Wacky Races". At this point, she tries to involve the Western culture with that of the Eastern one, by adding a pinch of Western aspect in a quite humorous and indeed an interesting manner. Your point about humour is accurate, though slightly repetitive and a touch vague. To improve: comment on the light-hearted mood of chaos and cartoonish, unreal element. Link to other quotations that show the light-hearted, and positive mood (see mark scheme - in the first bullet point)

Emma shows the time she waits for the race to start with lots and ltos of curiosity and enthusiasm. The dialogues used are evidences to the team's anxiousness. For instance, when the team discusses, "We'll open the car boot ... that's no problem." The dialogues verily highlight the amount of curiosity they have for the race to start. The use of direct speech gives a realistic feel to the situation. The waiting time is again accentuated when the writer adds in, "We waited ... brow of the hill, ...". The hyperbole made by the word 'eternity' exaggerates and hence emphasizes on the long time they waited for the race. She shares every aspect of the experience. This is very good (see mark scheme, bullet point 4)
As soon as the race starts, the writer gives a descriptive feel in the text, for example: "we spotted two ... in their wake". The description provided suggests to me that it allows readers to picturize the exact scene in their minds. This, ultimately adds to their interest and they easily understand what the writer is sharing with them, her experience. This is a vague comment and I feel the examiner would want something more specific (see bullet points seven, eight and nine below)
Emma also gives a bit of facts and useful information which maybe unknown to some readers, so as to maintain a feel of reality to the text. An exceptional example is where it says: "... the Kibla donkey ... 40kph". The use of beneficial and exotic facts brings up the undoubtedly true point in the readers  that the writer has a really good and tight grasp on the subject. This, consequestly, lends credibility to the text. Ultimately, the writer successfully conveys her experience to the readers, in a very interesting and efficient manner. (see bullet point 12 - maybe a comment about how the speed gives a sense of danger - then pick up on language choices that convey chaos/speed/jostling - in contrast with the slow pace from before)
The fact that she chooses "donkey racing" is that her primary audience, the Westerners are obviously unaware of these of types of sports which are part of the old Eastern culture. Also, these people are keen to know about new places, which makes the task of sharing her experience successfully among the readers much easier for Emma Levine. (this is vague. Better to pick out a specific language feature of mood/ structure of the article)

This is a good effort. By using the mark scheme below you can see how to make your answer score more highly with more specific and thorough references to the details of the text.

It looks like you're in Band 2, probably just above the mid-section as you're making some specific interpretations but many of your comments are quite general. If you take a look at the bullet points (from the mark scheme, which I've included below your answer), you can see that there are quite a few more points you might like to include. I can't stress highly enough how important it is that you mark your own work using the mark scheme as then you'll get a great understanding of what exactly the examiners are looking for.
In addition: you should quote more than once in each paragraph to reach the higher grades.

Edexcel IGCSE Revision Page
Get more Of Mice and Men Resources here.
All GCSE and IGCSE