What is an Oxymoron? 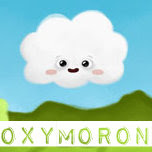 ATeacherWrites.com
Not what you're looking for? scroll down to get links to all novels and essays on this site...
An oxymoron is two words which are opposites, put together. Get the long list of examples below. Here are some oxymorons taken from Romeo and Juliet, spoken by Romeo in Act 1 scene 1.

These ideas seem to contradict each other. But they express the complexities of life. Parting is 'sweet sorrow' - we feel love and sadness at the same time. We can feel guilty and still enjoy eating all the cake, e.g. 'guilty pleasure', and 'waking sleep' means that you're awake but can't focus, and are in a dreamlike state - probably because of some distraction.

Like antithesis, oxymorons are two opposites put together, but directly together – in the same word, or noun phrase: to express a surprising, complicated truth. The opposites do not cancel each other out. Both are true.

'Bittersweet' is a compound word that contains two opposite ideas. Loving hate, from Romeo and Juliet, is a noun phrase. The two (opposite) parts express one idea; that Juliet is in love with a man she should hate. She is torn between two feelings. Both are true.

Sometimes the oxymoron expresses 1. the way it appears to other people and 2. how it really is

controlled chaos: my bedroom/life looks like a mess to you, but I know exactly where everything is/what to do

accidentally on purpose: I made it look like an accident when I deliberately pushed him over

Sometimes antithesis expresses 1. a literal truth and 2. a metaphorical truth.
alone in a crowd: means you are literally among people, but you are emotionally lonely, e.g. metaphorically, you are ‘alone’ c.f. I feel very alone
deafening silence means a shocked reaction to something that was said or done. The silence is literal; deafening is metaphorical – i.e. can’t be ignored, painfully obvious.
living dead, living death, buried alive. Here, the people are literally alive, but metaphorically dead (e.g. not living a full life, or feeling trapped).


- I do here make humbly bold to present them with a short account of themselves and their art. -Jonathan Swift


With loads of learned lumber in his head. -Alexander Pope

- He was now sufficiently composed to order a funeral of modest magnificence, suitable at once to the rank of a Nouradin's profession, and the reputation of his wealth. -Samuel Johnson

- Senator Rosebud calls this a useless plan; if so, it is the most helpful useless plan we have ever enacted.

The author, Melanie Kendry, is an Oxford graduate, outstanding-rated English Language and Literature teacher of ages 10-18 in the British education system. In 2012, she was nominated for Pearson's Teaching Awards. As a private tutor, she raises grades often from C to A. Her writing is also featured in The Huffington Post