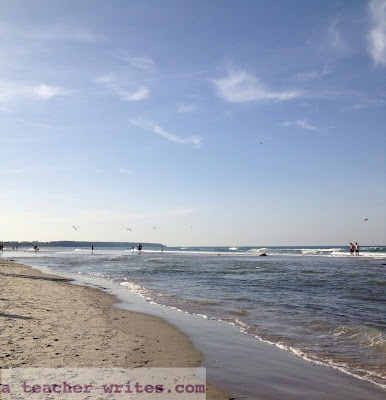 This essay comes to you thanks to Sofia, who wrote this beautiful, super detailed analysis of one of the most boring texts in the Anthology. Thanks, Sofia!

Essay Title:
How does the writer use presentational features, structure and language to create an effect on the reader?

Even within the title there is already a language feature.  It is in the 2nd person, ‘“your” guide to beach safety’, making the leaflet seem more personal to the reader.  This is also used in the sub heading and throughout the leaflet.  Antithesis is used in the subheading; “Your guide to a safe and fun time at the seaside.”  Safe and fun are not two words that you would specifically put together in normal circumstances, but the effect that it gives is that this booklet will supposedly make being safe fun, the title is also in a weathered font emphasizing the ‘on the beach’ title.  The logo at the bottom of the page ‘RNLI lifeboats, lifeguards, life first,’ is not only a rule of three but also uses alliteration, the rule of three is used to make a complete picture of what the organization is about and how they work.  The alliteration also contributes interesting effects; it gives the logo a punchy rhythmic feel and gives it a feel of action and possibly even danger.  Finally on the first page is a warning sign, we know this by the big exclamation mark, and this immediately draws our attention to the box.  The message begins with the conditional; “if you see someone in difficulty, never attempt a rescue.”  Although “if” is a conditional it is put in contrast to “never”, which is not only an imperative but also an absolute, the contrast is effective.  Carrying on with the imperative it goes on to say “tell a lifeguard or if you can’t see a lifeguard, call 999 or 112 and ask for the coastguard,” the double imperative and the factual phone numbers “999” and “112” give a sense of urgency to the message.

The second page starts off with a title “True Story”, it is in a big font, which immediately draws us to it.  The passage of writing is an anecdote- a first hand account- and with the data that is in the passage the first person makes us feel more emotionally attached to the storyteller.  The photo at the bottom also emphasizes the reality of danger, and the specific example makes a situation which to most people is a scary and surreal, very real.  “The water was like a whirlpool,” although “water” and “whirlpool” are related to each other water makes us think of cool, collected and calm, where as whirlpool is a bit of an antithesis because, although they have a similar subject, whirlpool makes us think of danger, wildness and unruliness.  This antithesis links and contrasts and the alliteration emphasizes that although something can be beautiful and calm it can change in seconds to become dangerous and irate.  Throughout the poem there is a theme of semantic fields of words such as “terrifying” and “drown,” these bring across the point of the story being serious and that it isn’t just a little accident at the beach.  After the lifeguards had saved her children the lady says, “I’ll certainly always go to a lifeguard patrolled beach.”  Although this isn’t the conditional it is sort of influencing you to also do this as you have read her story and it does make the beach seem more dangerous than you previously might have thought.  The side bar has an informal, colloquial title- “rips”- it is in the same font as the title and also has a warning sign as well which again, attracts us to the writing.  The imperative is clearly very present throughout the section, for example, “stay”, “don’t”,  “keep”, “raise”, “swim”, and “never”- which is also an absolute.  This indicates that this is a list of instructions, as do the diagrams at the bottom.  The same message from the first page is repeated emphasizing how important it is.
The flags go from the most positive to negative, this is probably because readers prefer to read about positive things and usually receive bad news better if they have the good news first.  Imperative is used “never” throughout, and in the description of the red flag says “Danger!”, this has use other than for emphasis, the exclamation mark rings alarm bells in the readers head of danger.  Warning sign and message is again repeated towards the bottom.  The next section “swimming, surfing and body boarding” has a sort of hypophora.  It isn’t exactly a question and answer; the text answers the title in a similar sort of way.  Further through the section quotes and official body “British Surf Association”, this gives the writing a sense of professionalism.  It uses absolutes such as “always” and “never” which are followed by short punchy sentences.  They are short because it is easier for the reader to consume short sharp bursts of information.

The 4th page begins with the 2nd person of “we” making us feel more included and involved.  Antithesis is used in the 4th sub heading- “ordinary people, extraordinary acts”, giving an effect of surrealism intriguing us to read further on.  The title of “beaches need lifeguards” uses the imperative of “need”, I think it does this because obviously beaches do not need lifeguards to survive but it emphasizes the fact that lifeguards are important and according to the article an “essential”.  The writing holds a lot of facts and percentages, for example “as much as 95% of our lifeguards’ work is preventative,” and “every year costs at least £450 to equip an £900 to train each lifeguard- will you help us meet that need?”  Facts and statistics help writers to put things into perspective and show the scale of things.  The second quote also contains emotive language, “will you help us”, further on it uses emotive language again to get across the point of seriousness in the situation, it says, “Whether we are rescuing an offshore fisherman or a child swept out to see, the RNLI exists to save Life First.”  This quote also refrains the logo “Life First” giving us a perspective of the organization and it’s priorities.