Analysis of Remember, by Christina Rossetti, for the Edexcel IGCSE English Exam

ATeacherWrites.com
Essay Title
In ‘Remember’, how does Christina Rossetti use language and structure to get across the theme?
On the surface, ‘Remember’ is all about death. The poem is written in the second person, evoking a relationship of some kind - of ‘you’ and ‘me’. But is ‘me’ identical to the poet? In other words, is it Rossetti who wants to be remembered? At the time of writing, Rossetti was only nineteen, but had lived many years with a dying father so this may be interpreted as either a dramatic imagining of her father’s impending death, or a generalised mortality poem. The plurality of possible interpretations gives this deathly, fearful poem a strange energy.

Part of the power of ‘Remember’ comes from its use of the imperative to command emotions - ('remember'. 'forget') which normally we can't control, even in ourselves. [now for the boring bit about structure which I didn't manage to link up very well:] The poem is in the first person, set out as a sonnet with an elegant, complex interlaced rhyme scheme which fits well with the tangled possible interpretations. The strong rhythms of the iambic pentameter give a lulling, gentle feel, although the mood shifts and becomes sinister in parts. Sentence lengths are regular, with four lines then four then six, as if the ideas start to run away or expand towards the end.

(1) I’m going to interpret the poem first, as if it’s wholly from her point of view.

‘Remember’ can be viewed as a fantasy of the poet’s own death. Rossetti herself was severely depressed and suffered a nervous breakdown not long before she wrote ‘Remember’. Many of her poems have a morbid theme, with the notable exception of ‘Birthday’. But who is the loved one, or ‘you’ that it’s addressed to?

The phrase ‘future that you planned’ would seem at first glance, to prove that the poem is addressed to her parents, but she writes ‘our future’. The inclusive ‘our’ suggests a suitor or future husband. In this case, the intimacy also includes a controlling aspect: it’s ‘our’ (plural) future that ‘you’ (singular) ‘planned’ - in other words, someone else has planned out her future. If this is a relationship, the language she uses suggests she feels she’s being treated like a child. 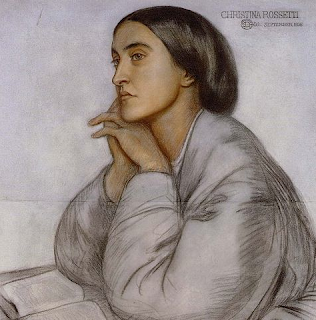 For the most part, Rossetti paints herself as the passive subject - even victim - first of death, then further down the poem, of the addressee as they ‘counsel’, ‘pray’ and ‘planned’ - controlling her. She seems not entirely reluctant to escape this control, and is certainly not unaware of it - making us vividly aware of the female marriage vows ‘to love, honour and obey’ [only the woman has to promise to 'obey'] ‘till death us do part’. In fact, Rossetti had several serious suitors - including two at the time she wrote ‘Remember’. Her marriage was planned three times to three different men, but at the last minute, on each occassion - she called it off.


The turbulent feel continues in the line ‘half turn to go yet turning stay’. It's tortured: ‘turning stay’ is an oxymoron suggesting turbulent mixed emotions - further increased by the energy of the ‘ing’ word - as if she’s continuously ‘turning’ though she has to ‘stay’. In addition, there’s the polyptoton of ‘turn’ and ‘turning’, adding to the energetic sense of movement, frozen. If this is an evocation of Christina Rossetti’s own feelings, it suggests she wants to stay, and also to escape.

(2) if we read this as the voice of her dying father:

Alternatively, these turbulent lines can be read as an articulation of the fierce pull of life, and death during a terminal illness. This may derive from the eleven years her father lived with bronchitis (possibly tuberculosis) before it finally killed him. If we do read the poem as a dramatization of her father’s point of view, then lines like ‘future you planned’ take a less sinister, more melancholy tone. He’s lost the desire or ability to plan - through depression and illness -  and no one else need ‘plan’ for his ‘future’ as he has none; he’s dead. We don’t even need to see this as pegged specifically to her father; we can read it as a generalized expression of crossing the threshold into death.

The poem expresses the idea of threshold through negation. Every positive statement is negated: ‘no more hold me’, ‘nor I half turn’, ‘no more ... tell me’ ‘do not grieve’. This liminal, balanced mood blends seamlessly into the deeply grim. Almost without warning, we're dropped unexpectedly out of the euphemistic, almost romantic mood of the ‘silent land’ and ‘gone’, straight into the grave: ‘darkness and corruption’. We’re in the dark with a rotting corpse. Whether this is purely physical corruption, or the corruption of memory (as suggested by ‘remember’ and ‘forget’) - or both - is left open.

The section near the end loosely translates thus: if you forget me, briefly, don’t feel guilty that you ‘forgot’... it’s better you forget and can be happy, than that you remember me ('keep me alive in your mind') and are sad. It seems the speaker has made a surprising volte face. At the start of the poem, the addressee is commanded to remember. Now they're told to 'forget'. This seems odd as the command 'remember' was emphasised: as the title, and first word of each of the first two quatrains. The shift - which happens in the volta - can be seen as positive. The speaker's final wish is happiness, for us, the living, so the poem has a melancholy, gentle but ultimately uplifting feel.

On the other hand, if the speaker is Rossetti, this is a dark, fearful poem. She fantasises about her death. As it continues, she gradually relinquishes her grip on life, gladly gaining freedom in the dark, and the ‘corruption’ (of her flesh). Finally, she gives up any claim to be remembered, sacrificing the last fragments of her identity, telling the addressee not to feel guilty for forgetting she existed.

+ Get more on how to analyse poetry here, get model essays by poet here or click here for Cambridge IGCSE only

Use the ideas but please don't just copy and hand it in. Teachers, feel free to use this with the attribution: (c)2013 Melanie Kendry www.ateacherwrites.com  If you have your own blog, please link, don't copy. Thanks!