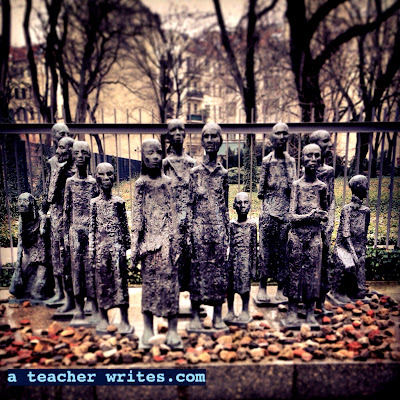 Brace yourself! It's a grim text and the essay's equally grim...

How does George Alagiah create a sense of pity in this extract?

In this extract, Alagiah creates a sense of pity through emotive language in lists and rules of three to create a sense of the profusion of suffering: ‘hungry’, ‘scared’, ‘betrayed’. The juxtaposition of the shocking and the boring, ‘same old stuff’, of ‘dirt floor’ ‘hut’ and ‘sitting rooms’ increases the pity by putting into perspective the gulf between our lives and those affected by the famine. It also shows, shockingly the dangers that if suffering becomes commonplace, then it will become normal. The idea that people don't care about the suffering increases our pity. The colloquial language ‘same old’, and ‘craving for a drug’ suggest the problem of apathy - the enemy of pity.

He increases pity by showing how much suffering he’s seen. He lists incidents, from a mother with her children to an old woman: all suffering from the war: the girls are suffering not just from hunger, but ‘terminal hunger’; the old woman is grievously wounded, alive, but ‘rotting’. Alagiah alternates between unpleasant and gentle words, describing the old woman’s leg as ‘gently’ curving, the girl’s death as ‘simple, frictionless, motionless’ repeating the soft liquids and sibilants in ‘less’, suggesting the ease with which death occurs. It’s so easy, it’s upsetting.

Finally, he shows us the ‘one’ man who made him see the problem differently. It’s the man’s embarrassment at being ‘seen like this’ that creates most pity: it’s not just suffering, it’s the loss of dignity and a desperate grasping after normality. In this, Alagiah explicity deals with the experience and problem of pity. The ‘one’ man almost seems embarrassed to be in such a pitiful situation and his embarrassment makes this all the more troubling. These people ‘aspire to a dignity that is almost impossible to achieve’. The lack of dignity in diarrhea, vomit in the camps - and our innate revulsion for it - makes Alagiah, and us, feel sorry for the suffering of these people.

How does George Alagiah create a sense of horror?

He makes us feel the horror of journalism in ‘famine’. He makes us horrified with the journalists: suggesting it’s ‘like the craving for a drug’. He says journalists - including himself - are ‘ghoulish’, like ghosts that prey on the souls of the living. This is made worse when he describes the ‘ghost village’ as if the people are already dead - but they’re alive. He shows he feels horrified at himself, too, as he describes a kind of lust for ‘the shocking’.

In the camps, he acknowledges ‘revulsion’ from ‘clammy hands’, using the semantic field of bodily disgust in ‘disgusting’, ‘taboo’, ‘excretion of fluids’, ‘vomit’. This is a hidden horror which reporters ‘never say’, and even in the paragraph he almost keeps a distance by repeating the infinitive ‘To be in a feeding centre is to’ - as if to keep it abstracted, at a slight distance.

In the paragraph with the old woman, Alagiah uses visceral sensory language about the ‘smell’ of ‘decaying flesh’ and the ‘festering wound’ - the ‘putrid air’ of decay. And yet, this woman is not dead. The paragraph is structured to place this information at the end, after a long build up, which intensifies the effect. The repetition of ‘it was rotting’, then more horrifically, ‘she was rotting’ is particularly awful; we don’t expect people to rot, and the image is powerful.

How does Alagiah present his relationship to the subject of the article, A Passage to Africa?

Alagiah shows mixed feelings of disgust and pity [I wrote about these above so won’t repeat that here].

The alliteration and rule of three in ‘collect and compile’ juxtaposed against ‘comfort’ sets out the basic tension in the article: of making money from collecting other people’s suffering, and selling it to people sitting comfortably at home. He uses the semantic field of predation [being a predator] in: ‘journalists on the hunt’ to suggest the sufferers are prey, or victims - of journalists like himself, which is particularly unsettling. Alagiah explicitly shows us how uncomfortable he is with what he does, while admitting it’s ‘like a drug’.

The subject of the article is ‘famine’ which he shows en masse then zooms in to the ‘thousand’ ‘hungry’ people, then one specific village of ‘Gufgaduud’ then names specific people ‘Amina Abdirahman’ who he speaks to, as well as ‘the old woman’ who he finds. This specific detail increases our pity and horror at the suffering through the particular examples. When Alagiah zooms back out again to a non-specific ‘feeding centre’ - using the infinitive ‘to be in a feeding centre is to’ to show an abstract, generalized picture, we’re shocked at his revulsion, but also get the same feeling of being overwhelmed.

Finally, he uses a short fragment paragraph ‘And then there was the face I will never forget’. This builds tension, because out of all Alagiah has seen which he says eventually becomes numbing, he uses the absolute ‘never forget’ to indicate how much this affected him. In this section, he builds suspense using rhetorical questions ‘What was it about that smile?’ as he seeks to uncover the mystery of why this one man affected him so much. This man is the only one who speaks directly to us - albeit through a translator ‘he’s embarrassed to be found in this condition’. Alagiah becomes connected to the subject, personally, where normally, he says he's 'inured'.

At this point, Alagiah marks a shift. He was the 'observer', but becomes, in a parallel sentence construction using polyptoton, 'the observed'. He's no longer the 'active' watcher of 'passive' sufferers, at a safe distance, but part of the scene. The distance of the initial antithesis is reversed and he's now uncomfortably close.

What’s particularly affecting is that Alagaiah links the man's embarrassed smile to the kind of thing you’d give ‘if  you’d done something wrong.’ The pathos of this is huge: these people are victims, so to take responsibility and feel guilt is very affecting, and emphasises the horror of their inhuman condition: of old people ‘rotting’ alone, children dying from ‘terminal hunger’, people ‘unable to control their bodily functions’ feeling embarrassed to be ‘ground down’.

This experience forces Alagiah to question himself, and to put himself truly in a situation he tried to distance himself emotionally from, and see it not as ‘a drug’ but real. He expresses his discomfort with the rhetorical question: ‘how should I feel to be standing there so strong and so confident?’ His one regret at the end is he never learned the man’s name - that the one man who made him see clearly remains his ‘nameless friend’, the oxymoron picking up the irony that the man never gained any individuality, though it was a unique experience.