Analysis of Ozymandias: "Look on My Works Ye Mighty and Despair" 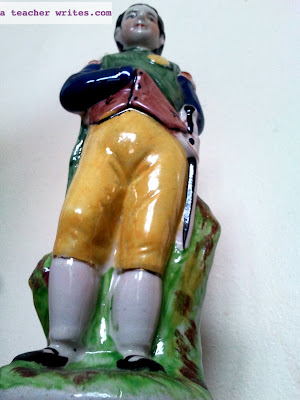 Get my video analysis of Ozymandias here, with more about the background to the poem.

What do we learn about the character of Ozymandias in this poem?

Shelley’s sonnet shows us the great ‘antique’ emperor ‘Ozymandias’ from three different points of view: that of the ‘travellor’, the ‘sculptor’ and the ruler himself, whom we encounter in direct speech in his own words.

We encounter Ozymandias gradually, stressing the physical and historical distance of this ‘antique’ ‘land’ and the ‘wreck’ of its civilization. The traveller speaks of ‘desert’ which suggests emptiness, isolation. The body appears from the ground up but is ‘trunkless’. This is the romantic, morbid ruin of classical civilization so beloved of the Romantic period. This gives it a mythical haunting quality as we see it from a distance. Immediately the travellor speaks of the large scale of the statue, which is ‘vast’, and impervious, made of ‘stone’, but he moves quickly from its physical aspects to the emotions of the man, ‘stamped’ on the statue.

The character of Ozymandias is portrayed, obliquely, through the description of his statue, which has a ‘frown’, ‘sneer’ and ‘cold command’, with the idea of contempt too in ‘mock’d’. On line 8, the poet balances ‘hand’ and ‘heart’ to show the man’s inner aspect (heart) and his works or deeds (hand), respectively: both are unpleasant. These symbols of his unkind nature are all that ‘survive’ in these ‘lifeless’ things. The antithesis of survival of the ‘stone’ and the lifelessness of the man create an eerie effect: as if the ‘shattered visage’ is watching or mocking us still.

Shelley describes Ozymandias as being full of ‘passions’ and ‘heart’ but also as ‘cold’: his passion is for power, as where he commands ‘Despair!’ and describes himself as ‘king of kings’. In this image, which evokes Christ, Shelley shows the hubris of Ozymandias since he compares this man’s god like arrogance to Christ, unfavourably. Ozymandias seems to believe his works will live forever ‘Look on my works’, but as the traveller shows, there’s little left of the ‘colossal wreck.’ The oxymoron shows the contradiction in the poem of Ozymandias’ self-perception of immortality, and the reality that all earthly power will pass away, leaving the world ‘boundless and bare’. The desert’s power is emphasised over that of Ozymandias: it stretches, vast, infinite. The only real legacy the king leaves is evidence of his pride, and cruelty: ‘nothing beside remains’.

The statue, and the words of the king, Ozymandias, are symbols of the transience [something that won’t last] of man’s greatness and self-belief.