ATeacherWrites.com
How do the presentational features and language get across the important message of both texts? 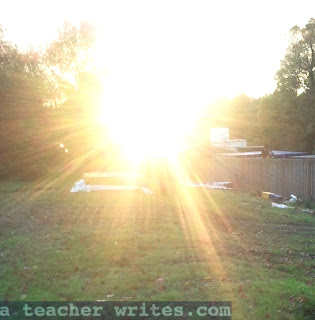 First, I’m going to do FAT-P to show what they have in common and what’s different, to make sure I focus on overall issues of structure and audience etc. As I wrote my FAT-P, I spotted some interesting relevant details in the articles.

The first article is a webpage from Greenpeace, an envionmental charity taking an active role in protecting the environment. The layout of the page includes more than one topic. The main focus is climate change, but it also includes a sidebar on Heathrow expansion, an RSS feed on general environment news and a menu with other topics. The second is on the same topic, Climate Change and has a similar likely audience of left-wing types - Guardian readers, who are interested in environmental issues.

I am going to now write about the way Greenpeace use the Imperative, a lot, to get people to take action.

The Greenpeace page makes heavy use of calls to action, using the imperative. This is a popular technique in adverts, used to persuade. In prominent positions at the top and bottom of the page are ‘Take Action’ buttons, which use the imperative to get the audience to either donate or get involved, thus furthering the work of the charity. On the right it has ‘Stop Heathrow Expansion’ further emphasised with a bold font in capitals, as if someone is shouting, creating an urgent effect. [make links] Directly above, to add emphasis, is written ‘Take Action’, and below ‘Add Your Voice’ - all in the imperative. This issue is separated out in a grey box to increase its importance, and has five sentences, four of which are in the imperative, and emotive language is used too: ‘Join the roar of voices’ - creative an inclusive feel of overwhelming (loud) protest. ‘Sign up’ and ‘Donate’ are more examples, here intended to get people to firstly join in, and secondly to fulfil the charity’s fundraising purpose.

Both sources have to deal with the fact people don’t like bad news that directly affects them, and would rather hear the solution than the problem. The Greenpeace page directly deals with this need by having a heading in the left sidebar: ‘The Problem’ and ‘The Solution’. Both deal with a subtext (background attitudes) of scepticism about whether Climate Change is real.