What Is Alliteration? Age 6-16 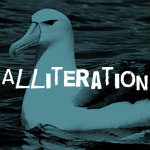 ATeacherWrites.com
Discover what alliteration is, how to find it and how to write about it. To use alliteration in your own writing, use the examples below to create interesting effects. It's OK to copy them at first, then start to make up your own.

What is Alliteration and How Do I Find It? KS3 Level 4 (age 8 up)
Look for words that start with the same letter:
Arthur the Amazing Albatross
beastly boys
cunning crocodile
delicious dung
evil eggs
fat fairy

A fun game to play with little ones, age six and up, is to draw pictures of the examples above. You could even make an alliteration alphabet. Once you've done a few, get your child to come up with some of their own examples. If they're struggling, you could give them a list of words to choose from and they can create their own. In fact, I think I'm going to do this with mine, this weekend. I'll post pictures once they're done. If you do one, email it and I'll put it in the gallery.

For older children, say eight and up, if they have a story homework, encourage them to include some alliteration in it. Suggest some examples they can use, and let them create their own.

Do the words that alliterate need to be right next to each other? No. But they need to be very close - on the same line.

How to Write About Alliteration: KS 3 Level 5 - 6 Grade C-B GCSE (age 11 up)
Comment on what effect it creates, or what it suggests - in context.

e.g. Delicious death chocolate cake is to die for.
How to Write About it: The alliteration links the words 'delicious' and 'death'. This suggests that the cake is so good it is worth dying to have some. The contrast of negative and positive moods is surprising and increases the effect.
e.g.
'Sudden successive flights of bullets streak the silence.' (Wilfred Owen, Exposure, 1917)

How to Write About it: The alliteration of 's' four times in this line creates a strong rhythm, as if the 'bullets' keep on coming. This creates a violent effect, as if you're under attack.

Advanced Alliteration: KS3 Level 8; GCSE Grade A-A* (age 13 up to 18)
Well done! You've found some alliteration. What next? See if there are any other techniques used at the same time. For example: antithesis, juxtaposition, semantic fields and sensory language. It's OK to pick out alliteration over two lines (in poetry) if the poet is deliberately making a link.

How can I do this?
Example:
'Sometime too hot the eye of heaven shines'*
Sonnet 18: Shall I Compare Thee to a Summer's Day, William Shakespeare, pub 1609

Please note: if you want to write about the alliteration, ONLY pick up on additional techniques (like antithesis) that appear in 'hot' and 'heaven'.

How to Write About it: The antithesis of ideals and reality in this poem is shown in the alliteration which links - and contrasts - 'too hot' with 'heaven'. The idea that heaven could be too hot is unexpected and draws out the theme that too much idealism can be a bad thing.
To power up your analysis, comment on sounds too: sibilants, plosives, liquids and nasals too.