Essay on My Father Thought it Bloody Queer, Simon Armitage 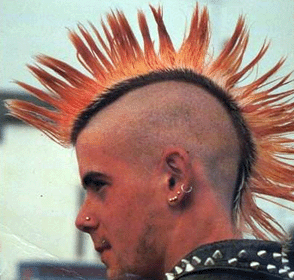 Summary
In this poem, Armitage explores an incident when he had his ear pierced as a teenager, and his father's shocked reaction to it. This poem is about coming of age, asserting your own identity, and seems to show he has a bad relationship with his father. Actually Armitage shows closeness to his father: he can easily create a sense of his father's voice, which he does using a lot of colloquial language.
Armitage takes the earring out, years later, feeling that there's no need to be shocking now. The ear piercing is a rite of passage, or ordeal: the poet has hurt his own flesh which 'weeps'. The physical wound links to his father's upset - that his own flesh (his son) has done this.

A* Analysis
This is an essay written to help a student prepare for the OCR GCSE English Literature poetry exam. It's not finished, and is about 350 words long - a side and a half of medium handwriting.

Do not cut and paste this and hand it in to your teacher, please!

Question
What does the poem tell us about relationships?

The poet narrates a true experience with his own father from when he was a teenager. In the final stanza the poet looks back, aged ‘twenty nine’. The poet marks the time shift by shifting from past into present tense. This poem is a nostalgic look back at a defining moment from Armitage's childhood, his relationship with his father and how he feels about it now.

From the first words of the title, ‘My father’ shows that Armitage’s memory of his childhood, like the poem is dominated, looked over, by his father. The effect is intensified by the fact that the words 'my father' are repeated in the first line.

As a teenager, the poet's father is an authority figure. Armitage calls him ‘father’ which is formal and seems distant, commanding respect. However, his father uses colloquial language ‘lost your head’ ‘easily led’. These proverbial phrases are judgemental and don’t show real communication, which adds to the sense of distance.

However, his son can almost read his father's thoughts, which suggests a kind of closeness: ‘my father thought it bloody queer’. ‘bloody queer’ can’t be the way the poet would describe himself, as it seems too harsh and violent. It seems to fit with the colloquial, judgemental phrases that his father uses. The poet is close enough to his father to be able to 'become' him - for these lines in the poem. ‘queer’ is used to condemn something that doesn’t conform. The whole poem is about rebellion.

The first stanza has a regular rhyme scheme with aabbb; however in the second stanza, the rhyme scheme starts to break down and seems irregular. This echoes the breakdown in authority or control as the poet rebels. In the final stanza, a kind of balance or compromise is reached, the first and last lines rhyme together (12,15), but the middle two are free, or unrhymed (13,14).

The words ‘slept’ and ‘wept’ are rhymed, with ‘wept’ in a prominent position at the end of the stanza, which is also emphasised by the alliteration with wounds. Normally women weep, which contrasts with the manly rite of passage involving pain and a wound. It’s as if the body is weeping for the fact he’s injured it, the loss of his childhood and is a strange contrast to the violent, distant relationship.